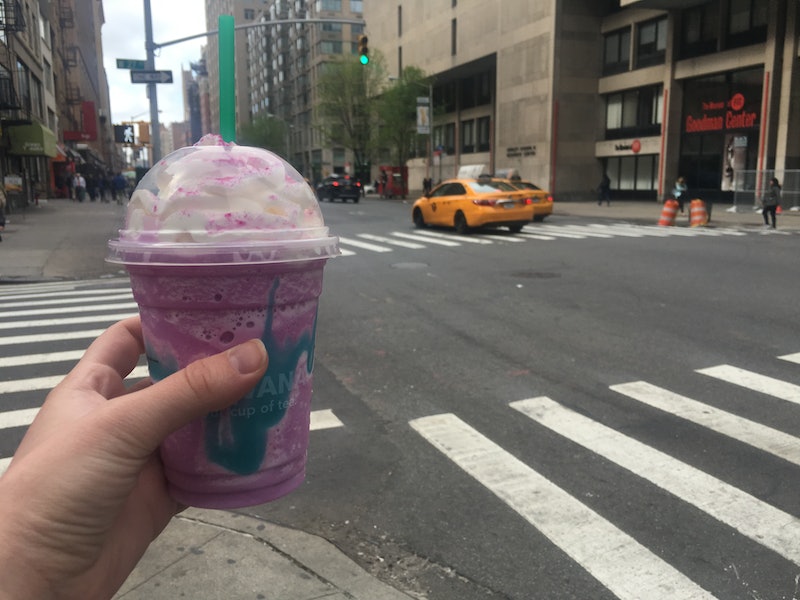 If you, fellow magical fairy human, are dying to know what the Unicorn Frappuccino at Starbucks tastes like, you are far from alone. I woke up this morning a mere mortal myself, but after trying the long-rumored, ridiculously anticipated beverage for the first time, I may have taken a glimpse into infinity. I can confirm officially that the Unicorn Frapp? One hundred percent worth the hype.

The drink, which is as delicious as it is fleeting — seriously, guys, it's only available from Thursday, April 19 to Sunday, April 23, so gallop on over fast — was given a helpful but still rather loose flavor profile by the Starbucks team. The drink has a crème frappuccino base with mango syrup, as well as an artful drizzle mix of what Starbucks calls "sour blue drizzle." It's then topped with whipped cream and pink and blue "unicorn dust," making it the object of your dizziest Instagram daydreams.

The real sweet sauce here, though? The fact that the drink is both flavor- and color-changing. The purple base shifts to pink the longer you drink it, and the flavor, which is initially more sweet, turns tart by the end — as mysterious and magical as an actual unicorn.

But what does it actually taste like? Well, friends, the first thing you experience will not be a taste, but the unstoppable compulsion to make the nearest sentient human with a camera take a picture of you being basic as hell.

Once that's over and you actually taste it, the ~magic~ begins. The base definitely has notes of mango in it, but not in an overwhelming way; if I hadn't known that was the flavor beforehand, I might not have guessed it right off. It's definitely sweet — the people with sweet teeth in the office didn't mind so much (aka me), but some others might want to speed along the process of making the drink tart by mixing the sour blue drizzle in faster than it would on its own. (Word to the wise: If you aim your straw at the blue drizzle and suck in that alone, it will COME FOR YOU like a pack of Sour Patch Kids in the night. If you're into sour flavors, it will be your jam.)

The flavor change is subtle, but definitely welcome — you don't get the same drink fatigue you might if you're bored of a flavor halfway through. Word to the wise, though: DO NOT MAKE A ROOKIE MISTAKE AND HOLD THE WHIPPED CREAM. Look me in the eye and promise me you won't. It is essential not just for the 'gram, but also for the perfect and fragile flavor balance of this drank.

The Starbucks Unicorn Frappuccino retails in Tall between $4.25 and $4.95, depending on the market, and will be available at participating Starbucks stores in the U.S., Canada, and Mexico from April 19 to April 23. Godspeed, my fellow unicorn nerds; may your taste buds and your Instagrams be #blessed during this magical time.