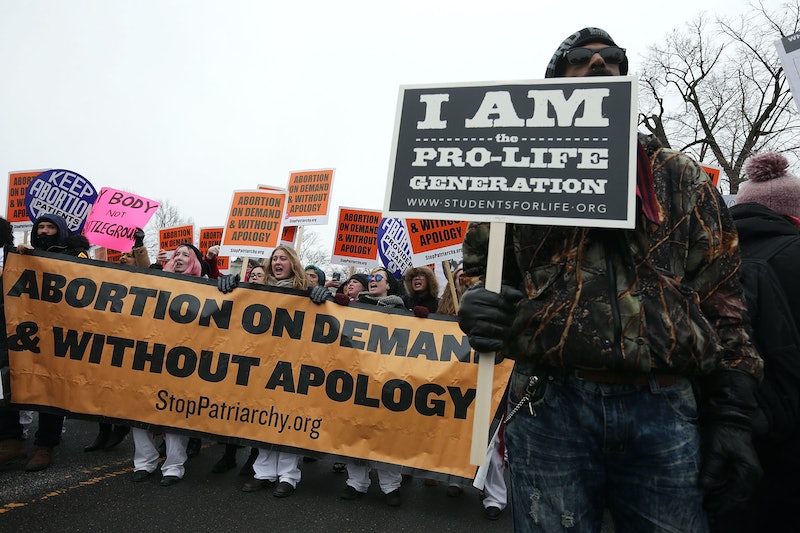 New Supreme Court Justice Brett Kavanaugh's fight for his seat is over, but President Trump's push to nominate conservative judges to the bench is still going strong. Now, two more anti-abortion judges could be confirmed to the U.S. Court of Appeals for the Sixth Circuit — and given some of the cases on that court's docket, the judges could play a major role in limiting abortion rights if their nominations pass the Senate.

The judges are Justice Department lawyer Chad Readler, and Ohio Solicitor General Eric Murphy; the latter has already fought against guaranteed contraceptive coverage in the Affordable Care Act, according to Mother Jones. The Sixth Circuit covers Kentucky, Michigan, Ohio, and Tennessee, and Mother Jones described how both of the nominees have already championed anti-abortion causes in Ohio.

Readler, according to Cleveland.com, represented Trump's election campaign as a lawyer after the Ohio Democratic Party sued over alleged voter intimidation. Mother Jones also reported that he has spoken out in favor of various anti-abortion moves that the administration has made, including its effort to prevent an undocumented teen from getting an abortion — which Kavanaugh was also a part of when he was a federal judge.

Another cause that Readler supported, according to Mother Jones, was the Trump administration's push to allow employers to deny covering any birth control as part of their employee health care plans. Murphy, for his part, blocked the state of Ohio from contracting with any organizations that provided abortions, including Planned Parenthood.

Readler and Murphy's previous stances on reproductive freedom could end up being very important even early in their terms on the Sixth Circuit court if they get confirmed. There are at least three cases dealing with abortion rights currently winding their ways through the lower courts, and there's a very good chance that they could end up in front of the Sixth Circuit Court of Appeals.

Two of the cases concern challenges to TRAP laws, which make abortion unnecessarily difficult to access, in both Ohio and Tennessee. Kentucky's last clinic that provides abortion is also fighting for its life after Kentucky Gov. Matt Bevin's administration tried to shut it down, and that's another case that could come up before these new Trump nominees.

Should the Sixth District — which will likely include Readler and Murphy — have the opportunity to rule on any of those cases, the next appeal would bring them to the Supreme Court, of which Kavanaugh is now a part. The Trump administration chose Kavanaugh as part of a long-running project to make the courts — and the Supreme Court in particular — more conservative, as The New York Times wrote. With Chief Justice John Roberts as the middle vote, it's becoming more and more likely that cases involving reproductive rights will be decided in favor of those trying to limit them.

District and appeals court judge nominations don't receive the same amount of media coverage that Supreme Court justice nominations do, but when it comes things like reproductive rights, they can play almost as big of a role as the Supreme Court. Readler and Murphy, as Mother Jones wrote, are very likely to get confirmed, and their presence on the court could pave the way toward the Supreme Court making a decision that could severely cripple Roe v. Wade.