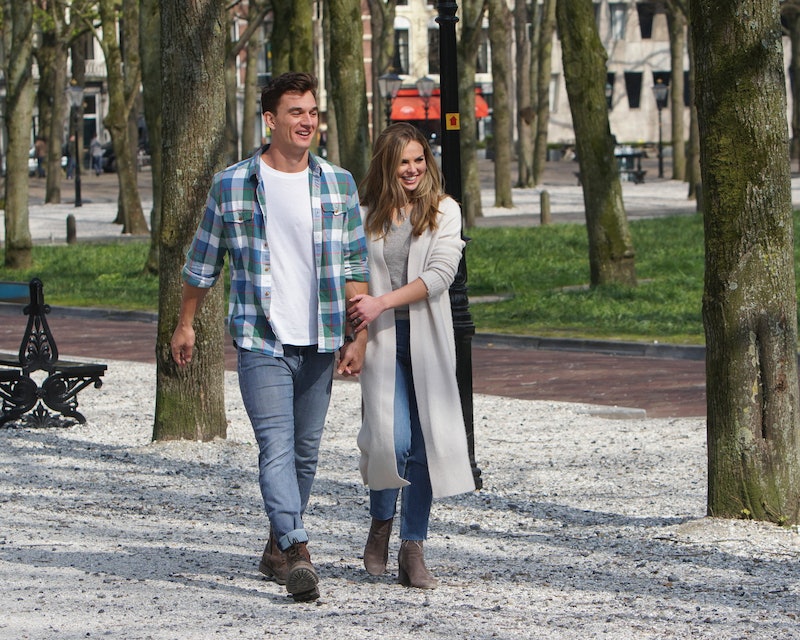 Now that it's down to the final four, Hannah B. has gotten to know the remaining Bachelorette guys pretty well. They've discussed their likes and dislikes, their pasts, and of course, their families. In fact, Tyler C.'s parents have been the focus of quite a few heart-to-hearts between him and Hannah. He's said he's learned a lot about love — the good and the bad — from witnessing the ups and downs of their relationship.

During his first one-one-one date in Week 4, Tyler opened up to Hannah about his close relationship with his dad, and how it nearly kept him from entering the Bachelorette mansion. "I almost stepped away. My pops almost died like two months before I came out here. He got really sick and he was in the hospital for like 25 days, he was in a coma for like 10 days. It was tough," he explained. "It was like the hardest thing I ever went through in my life. I really didn’t even want to come, but then like my pops kind of started recovering, had a successful surgery, every day I'm with him, doing everything I can to make him better."

Tyler added that his dad was the one who encouraged him to take a chance on love. "Me and my dad would sit around and watch The Bachelorette and he kind of like became a huge fan of you, and he was like ‘Tyler, this is your girl. You've got to go make the most of this opportunity.’" And that he did. During Tyler's second one-on-one, with Hannah, he talked about his parents again, specifically about their divorce. "My parents had a hard time turning to each other, and they kind of turned away from each other," he said. "And eventually my pops had to move out and it was hard to see that."

Tyler also promised to take Hannah to see his childhood home in Jupiter, Florida during his hometown visit. It's unclear how her meeting with his parents will go over, but his dad is in the episode preview, which could mean his health has continued to improve. In the clip, Tyler's dad admits his son seems totally smitten. "I look at you with her," Tyler's dad tells him. "And I think, 'Oh my gosh, he might be in love.'"

When the clip aired after Episode 8, Tyler was so excited to see his dad on TV. "Shout out to pops making a quick cameo!!" he tweeted. "Can’t wait for y’all to meet the real Cameron Crazies next week."

Tyler's mom, meanwhile, is proud of all of her son's accomplishments, including his time on The Bachelorette. She shares about him on her Facebook page often, and wrote the sweetest post for his birthday in January. "Happy Birthday to my favorite 26 year old!!" she wrote. "I didn't know what God had in store for me when he blessed me with you.. but I was certainly in for an adventure. Tyler, your journey has been incredible thus far, with every twist and turn your true character has resonated. Your [sic] an incredible son, caring big brother and an honorable friend! Keep it up, I love what I am witnessing."

By the looks of his Instagram, Tyler and his mom love to go out and have a good time together. Last summer, he shared a photo of them holding drinks at a bar. "Took mom and my cousin out last night," he wrote. "Needless to say they were having a rough time this morning."

Hopefully, the four of them — mom, dad, Tyler, and Hannah — have the opposite of a rough time during what could be the first of many hometown visits for the couple.