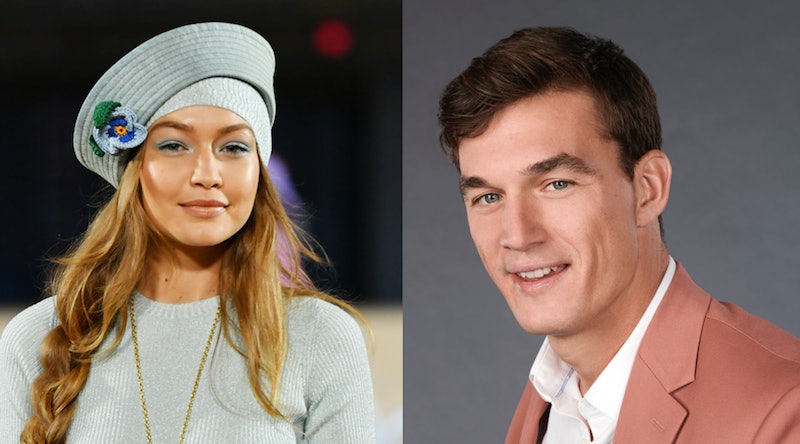 Ever since Hannah B.'s season of The Bachelorette came to an end, Tyler C.'s dating life has been a major subject of interest among Bachelor Nation. And while some were hopeful that he and Hannah would reconnect, he's been rumored to be spending quite a bit of time with someone else, though he's made a point of keeping the details under wraps — until now, that is. Tyler opened up about his relationship with Gigi Hadid during a recent interview with Entertainment Tonight, though he's opting to label their connection in a very unexpected way.

"We're just friends," he told the outlet. "I mean... that's just where we're at. Our relationship doesn't need to be public. She's good people, she's an amazing person and we're just keeping it friendly." Whether or not that statement is entirely accurate, it's clear that Tyler is preferring to keep his love life private these days, especially since his last serious relationship was on full display for all to see. "I'm at the point where I don't really want to talk about my relationships. I've dated publicly, so... I'm trying to date privately and I'm not in love with anybody right now," he explained. "I'm in love with myself."

Tyler proved to be a fan favorite contestant throughout the majority of Hannah's season. And when Hannah opted to be with Jed over him in the finale, his future as the next Bachelor seemed almost a sure thing. However, he has since been spotted numerous times hanging out with Hadid in New York City. He even attended her grandmother's funeral in the Netherlands earlier this month. There were even hopes that Hadid and Tyler would attend the 2019 Emmys together and make their red carpet debut, though, as noted by Elle, that ended up just being a rumor.

Still, from an outsider's perspective, the two of them certainly seem to be getting serious, which is what makes Tyler's remarks about friendship so surprising. Granted, that could just be him playing coy, since he also couldn't stop singing her praises. "She's an amazing person. We have a great time together," he told ET.

But romance isn't the only thing on Tyler's mind these days. His post-Bachelorette life is also filled with some new and exciting modeling opportunities. "That's going really well. I've got some cool campaigns coming out too, so [I'm] excited for that," he revealed. "I'm so new to that world and that industry. I'm just having fun with it and making a name of myself if I can."

Considering that Hadid herself is part of that world, is there a chance they'll ever end up on the runway together? In Tyler's opinion, she's out of his league. "She's a little bit more big-time than I am," he told ET during the same interview. "She's pretty good at what she does."

Whether Tyler and Hadid are "just friends" or not, it's clear that he respects her and her career. And, who knows, maybe one day they'll be stepping out on the runway and the red carpet side-by-side.

More like this
10 Photos Of The Wildest Limo Arrivals From 'The Bachelor' Premiere
By Brad Witter
Molly-Mae & Tommy Fury Revealed Their Baby Girl's "Really Unusual" Name
By Sophie McEvoy and Sam Ramsden
A Guide To All Of Zach Shallcross' 'Bachelor' Filming Locations
By Brad Witter
Zach Swears He Didn’t Look Up Contestants Before The Bachelor Began Filming
By Brad Witter
Get Even More From Bustle — Sign Up For The Newsletter
From hair trends to relationship advice, our daily newsletter has everything you need to sound like a person who’s on TikTok, even if you aren’t.