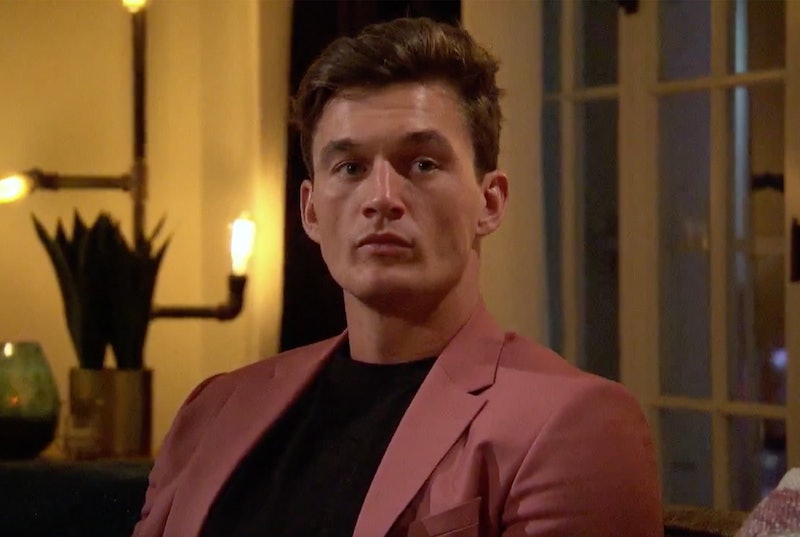 There are still so many questions surrounding Hannah Brown's season of The Bachelorette, i.e. her final rose recipient. But, there was one question that fans wondered all season long: what was going on with the salmon jacket? Recently, Tyler Cameron dished on The Bachelorette's salmon jacket mystery during an interview for the Bachelor Party podcast.

Pretty much every episode, someone wore a salmon jacket to the rose ceremony cocktail party. Tyler, Jed Wyatt, Dylan Barbour, and Connor Saeli all wore what initially appeared to be the same blazer. However, fans were shocked when Tyler and Jed both rocked the salmon jacket at the same exact time.

In his recent interview, Tyler finally clarified jacket situation. He said, "There's two salmon jackets." He confirmed that one belonged to him, of course, and that "Dylan [has] one." Tyler also revealed that he purchased his blazer from Zara and he seemed surprised by the praise for the jacket.

Tyler admitted, "I don't shop. I don't know fashion. I'm four years behind when it comes to fashion." He also revealed his strategy when he shopped for his Bachelorette wardrobe. Tyler shared, "All my suits were super tight because I wasn't gonna get them tailored." That's an interesting strategy. Tyler added, "I had to get it somewhat fitted." And it worked for him. That's for sure.

Aside from loaning out his jacket to Connor S and Jed, Tyler also let Mike Johnson wear one of his sweaters during a date with Hannah. For someone who claims to not know fashion, the guy has proven himself to be a pretty competent wardrobe stylist.

In a tweet that Tyler posted while Hannah's season was airing, Tyler simply tweeted "Salmon forever," which seems pretty vague, but all of the loyal Bachelorette fans knew exactly what he was referring to.

In June, Tyler posted two different salmon-related memes to his Instagram Story that were photoshopped versions of a movie poster for The Sisterhood of the Traveling Pants, which is so fitting since the jacket universally worked for all of the contestants from The Bachelorette just like those jeans worked for the women in the film.

However, this version was deemed The Sisterhood of the Traveling Blazer. The first meme featured Tyler, Dylan, Jed, and Hannah, but Connor was excluded. In the second one that Tyler posted, Connor was included.

Even though Dylan did rock the salmon jacket, he also wore a bright yellow one and joked that it was a better choice.

Jed also poked fun at the omnipresent salmon blazer with an original song that he wrote. And, thankfully, it was not to the same tune as that "Mr. Right" song that he sang all season long.

Jed's other song lyrics didn't get much praise from the Bachelorette fandom, but this track made a lot of sense. Jed sang "It's floating around like a ghost in the wind/ every rose ceremony it's back again/ you never really know who might have to have it/ it's the mystery of the salmon jacket."

And, now, it's no longer a mystery thanks to Tyler's recent reveal. The guys really should have worn salmon jackets during Men Tell All one last time, but the blazer will forever have a place in Bachelor fashion history forever.