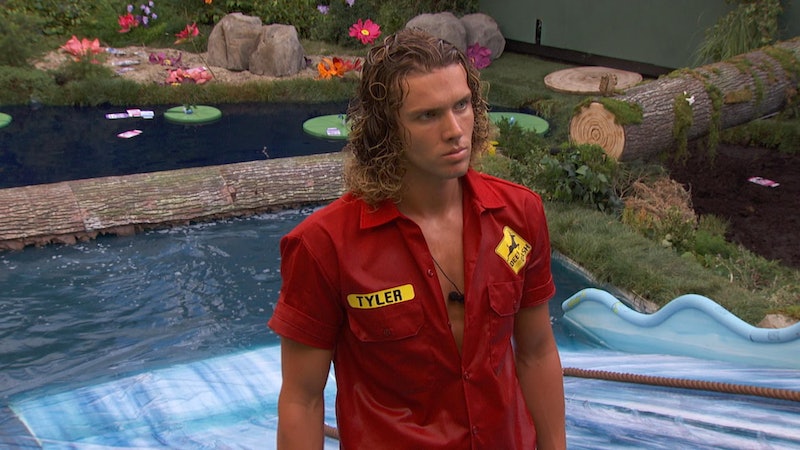 Big Brother 20 has assembled an entertaining cast filled with diverse personalities, but it's Tyler who stands tall amongst them as the person most adept at competing on the show. While fans of the show have gotten to know Tyler well within the context of Big Brother, tonight's episode reveals more about the BB All-Star in the making when it takes a visit to Tyler's hometown of Rossford, Ohio. The Aug. 16 Big Brother episode included interviews with Tyler's family and hometown community and revealed some surprises about the lifeguard — including a heartbreaking backstory and the revelation that despite his "surfer dude" persona, Tyler has never surfed a day in his life.

During the visit, Tyler's mother revealed that prior to his career as a lifeguard in his current home of Hilton Head, South Carolina, Tyler spent much of his youth bowling. Tyler had previously said in the house that he had accomplished the impressive feat of bowling a perfect game of 300 points, and his mother confirmed that Tyler's penchant for bowling comes from a lifelong love of the game. She even insisted that he could've been a professional bowler had things gone differently — but Tyler stopped bowling after the death of his father. Tyler's mother explains that Tyler and his father used to do everything together, and hinted that his father's death kept Tyler from wanting to bowl.

Hometown visits on Big Brother are usually fun, light-hearted affairs. BB20's previous hometown segments, which introduced the BB audience to Bayleigh's family and Sam's hometown, were heavy on camaraderie and low on tearjerking moments. Tyler's hometown segment also showed the Rossford, Ohio community coming together to support Tyler, but learning that he lost his father at 17 and may have given up on a dream of being a pro bowling as a result of the loss tugged at the heartstrings of many Big Brother fans and a few Big Brother veterans.

Tyler may have had a difficult time coping with the loss of his father, but he doesn't hesitate to pay tribute to him while in the house. During the most recent Veto competition, Tyler called out, "This is for my Daddy, right here" upon winning. The hometown segment suggests that Tyler's victory streak — he's won three POV's and one HOH — comes from a competitive nature that was cultivated through not just Tyler's history of bowling, but through other sports like football and soccer as well. But though he seems to have played every sport under the son, his mother is insistent that Tyler has never surfed, much to the surprise of Big Brother fans. The hometown segment ended with the mayor of Rossford, Ohio declaring that upon his return, Tyler will be awarded a key to the city.

Tyler may give off a carefree attitude while in the house, but his hometown visit shows that he is not nearly as carefree as he seems. He spent his whole life playing to win, and it's clear that he is treating Big Brother no differently than he would treat any other sport from his past — except for surfing, apparently.