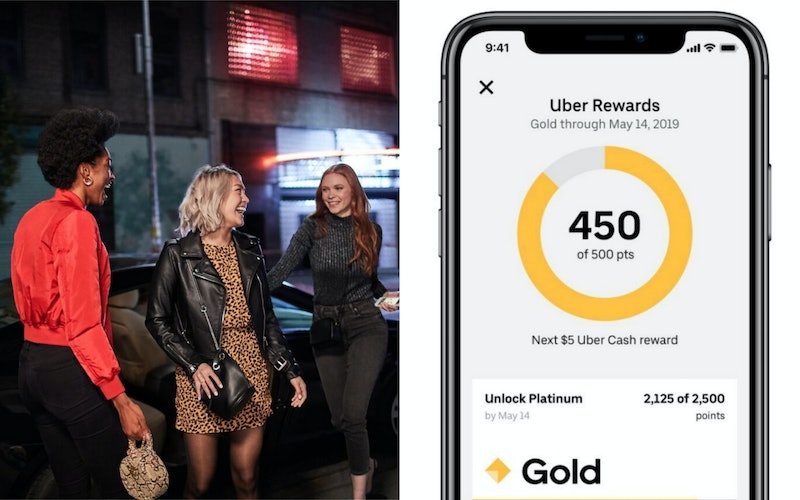 There are many perils to living in the modern, smart-phone-addicted era, but ride share apps are a pure exception. There's nothing I don't love about being able to holler for a ride via an app wherever and whenever I need it — not to mention the joy of Uber Eats delivering a meal of choice to my doorstep. We are #blessed, fellow millennials. And if you, too, are an avid Uber and Uber Eats user, then I've got some divine news for you: The company is launching the brand-new Uber Rewards program, a points-based rewards system for its customers that's filled to the brim with all kinds of perks. The program launches Nov. 14 and is totally free to join — so whether ride sharing apps are part of your daily getting-to-work-on-time routine or merely a late-night indulgence, you'll want the details so you can opt in ASAP and start reaping the benefits.

So, want those Uber points and all the perks that come along with them? Here's the deal: By joining Uber Rewards (which you'll be able to do for free through the app), you'll automatically start earning points for every dollar you spend on an Uber ride or Uber Eats purchase — officially making your Uber addiction way more justified. Uber Eats and UberPool purchases will earn you a point for every dollar spent (business rides included!), while UberX, UberXL, Select, and WAV will earn you two points per dollar. If you're ordering Black and Black SUV, you'll get a whopping three points per dollar spent on a ride. And for every 500 points you accrue, you'll get access to a $5 Uber credit — which automatically makes the program worth signing up for, IMO. Who doesn't need free Uber bucks? You can spend your credits on either rides or Uber Eats deliveries, so pick your poison.

Uber Rewards has four tiers — Blue, Gold, Platinum and Diamond — and each comes with their own extra set of perks. Once you hit 500 points, you'll bump up from Blue to Gold (in addition to earning that coveted $5 credit — woot woot!). Gold members get perks such as waived cancellations fees within 15 minutes and priority customer support access, both of which are obviously much needed by all.

As you work your way up the Uber Rewards tiers, the benefits keep on flowin'. Accruing 2,500 points will bump you up to Platinum territory, which adds perks like locked-down low prices on your route of choice (even during peak traffic hours) and priority airport pickups. Finally, hitting 7,500 points will push you all the way into shiny Diamond-level land, where you'll live the Uber dream with 24/7 phone support, surprise free upgrades on your rides, a waived delivery fee on three Uber Eats orders every six months, and more — plus all the perks of the three lower tiers, too.

Points are accrued during earnings periods that are broken up into six month blocks, and begin on the date you sign up for the program. Every time you unlock a new tier, you'll reap its benefits for the remainder of your earnings period plus the next six months. And as a special kick-off promotion, every eligible Uber and Uber Eats purchase made in the six months prior to joining the program will count toward your total points, too — meaning you could end up automatically advancing up to Gold, Platinum, or Diamond off the top. Pretty dope, right?

Uber Rewards launches on Nov. 14 in nine cities before being rolled out nationwide — so if you're in Atlanta, Denver, Miami, New Jersey, New York, Philadelphia, San Diego, Tampa, or Washington DC, prepare to start earning points ASAP. Otherwise, get yourself a head start by joining the Uber Rewards waitlist so you'll be the first to know when the program hits your area. And according to Uber, the company has plans to include bikes and scooter shares into the Uber Rewards program at some point, too.