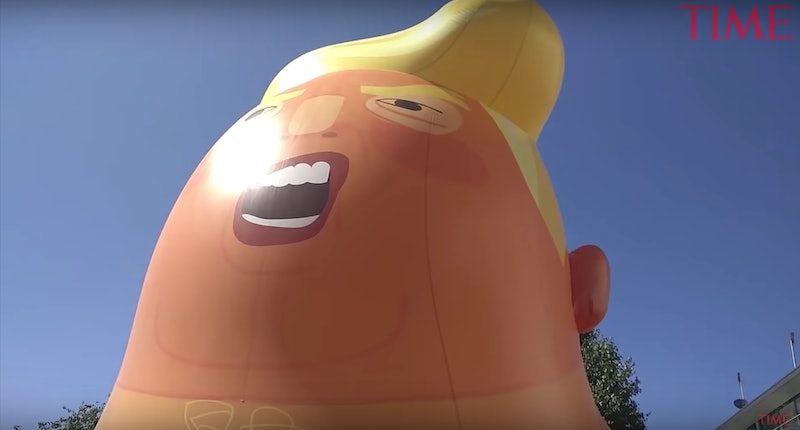 In anticipation of the president's upcoming visit to the United Kingdom, activists in London have erected a giant orange balloon depicting Donald Trump as a baby wearing a diaper. Leo Murray, the environmentalist who dreamt up the project, told TIME that the Trump-as-a-diaper-baby balloon represents "how the world sees him.”

The Trump baby balloon is currently grounded in the city, but the activists behind it are crowdfunding donations in an attempt to fly the balloon over central London when Trump makes his first official visit to the United Kingdom as president in mid-July.

The crowdfunding page makes it clear that the balloon is not intended as a light-hearted tribute to the president, but rather as a forceful condemnation of him.

"Donald Trump is a big, angry baby with a fragile ego and tiny hands," the website reads. "He's also racist demagogue who is a danger to women, immigrants and minorities and a mortal threat to world peace and the very future of life on earth. Moral outrage is water off a duck’s back to Trump. But he really seems to hate it when people make fun of him. So when Trump visits the UK on Friday the 13th of July this year, we want to make sure he knows that all of Britain is looking down on him and laughing at him."

Although Trump has been in office for around a year and a half, he has yet to make an official visit to England, which is generally considered America's closest ally. He had originally planned to take a trip to the country in February, but canceled that trip weeks before he was set to leave. Trump's official reason for nixing the visit was his opposition to the new American embassy in England, which he said was a "bad deal" and incorrectly blamed on Barack Obama.

"Reason I canceled my trip to London is that I am not a big fan of the Obama Administration having sold perhaps the best located and finest embassy in London for “peanuts,” only to build a new one in an off location for 1.2 billion dollars," Trump tweeted at the time. "Bad deal. Wanted me to cut ribbon-NO!"

In reality, the new embassy was approved when George W. Bush was president. Some suggested that Trump canceled the meeting because he didn't want to confront the massive protest Londoners were planning to greet him with.

But by all indications, Trump will still be greeted with throngs of protesters when he touches down in the U.K.: An anti-Trump demonstration planned to take place in London during his visit already has over 50,000 confirmed attendees on Facebook. There's also a campaign underway to get Green Day's 2004 hit song "American Idiot" to the top of the U.K. music charts during the week of Trump's visit.

The activists behind the big orange Trump baby tell TIME that they're still negotiating with local officials over whether or not the balloon will be allowed to fly over Parliament Square in London during Trump's visit. Filling it up with helium costs about $1,050, according to TIME.

Murray's plans for the Trump balloon aren't limited to the president's visit, however.

“We’re hoping the extra money is going to allow Baby Trump to go on tour, to visit the United States but also other assorted locations around the world where Donald Trump may be going,” Murray told TIME. “Hopefully Baby Trump is going to start haunting him, following him around.”