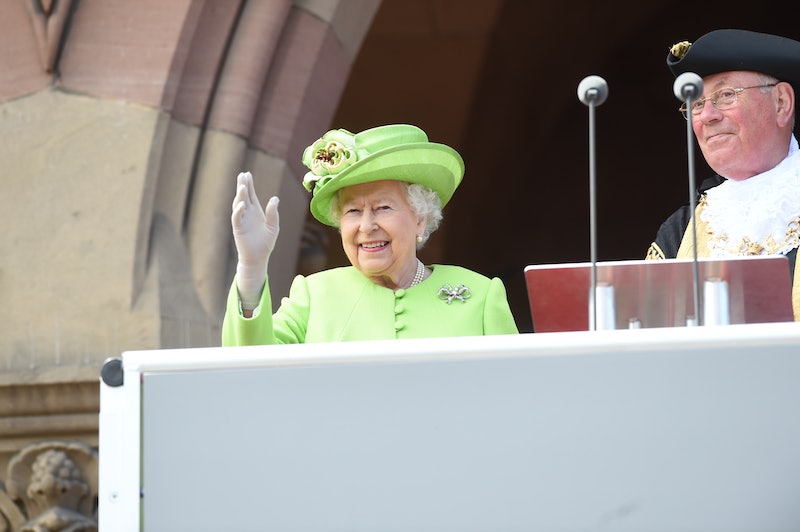 In July, President Trump will take a trip across the pond and visit England for the first time as president. He'll be holding bilateral discussions with United Kingdom Prime Minister Theresa May, and while little else is known about his itinerary and schedule, the Sun reports that the first lady will be accompanying him, raising the possibility that Melania Trump will meet the Queen of England. Bustle has reached out to the White House for confirmation of the Sun's report.

"The President of the United States will visit the UK on 13 July. He will hold bilateral talks with the Prime Minister during his visit. Further details will be set out in due course," the British government announced in a press release in April.

According to the Financial Times, this won't be an official state visit, but rather a "working visit." Unlike state visits, which feature elaborate banquets and other large public ceremonies, working visits are light on pomp and circumstance, with limited press availability and public appearances by the visiting dignitaries.

However, the Sun reports that the president and first lady will be going to Windsor Castle during their trip to visit the Queen, where they'll be greeted by the Coldstream Guards, the British Army's oldest regiment. It will be one of the first outings for Melania since she was admitted to the hospital for kidney surgery in early May, after which she didn't appear publicly for three weeks.

Trump was originally scheduled to make his first presidential visit to England in February, but he cancelled the trip in mid-January. According to the president, he didn't want to preside over a ribbon-cutting ceremony for the new American embassy in south London, and nixed the visit to avoid having to do so.

"Reason I canceled my trip to London is that I am not a big fan of the Obama Administration having sold perhaps the best located and finest embassy in London for 'peanuts,' only to build a new one in an off location for 1.2 billion dollars," Trump tweeted. "Bad deal. Wanted me to cut ribbon-NO!"

In actuality, however, the relocation of the American embassy in England was approved during the George W. Bush administration, months before Barack Obama became president. Some speculated that in fact, Trump cancelled the trip to avoid confronting a massive protest that his detractors in England were planning. London Mayor Sadiq Khan said at the that Trump "got the message" and expressed regret that he was invited to England in the first place.

“It appears that President Trump got the message from the many Londoners who love and admire America and Americans but find his policies and actions the polar opposite of our city’s values of inclusion, diversity and tolerance,” Khan said. “His visit next month would without doubt have been met by mass peaceful protests. This just reinforces what a mistake it was for Theresa May to rush and extend an invitation of a state visit in the first place.”

But although the July trip will merely be a working visit, it will most likely be greeted with mass protests regardless. According to Variety, an anti-Trump demonstration scheduled to take place in London during the Trumps' trip drew over 42,000 RSVPs on Facebook just days after the visit was announced, and there's a separate ongoing effort to get Green Day's 2004 hit song "American Idiot" to hit the top of the U.K. music charts during the Trumps' stay.

Whether the president and first lady actually witness any of these protests is another question entirely. An English official told the Financial Times that ''there won’t be anything [during the visit] where he can be publicly shouted out."