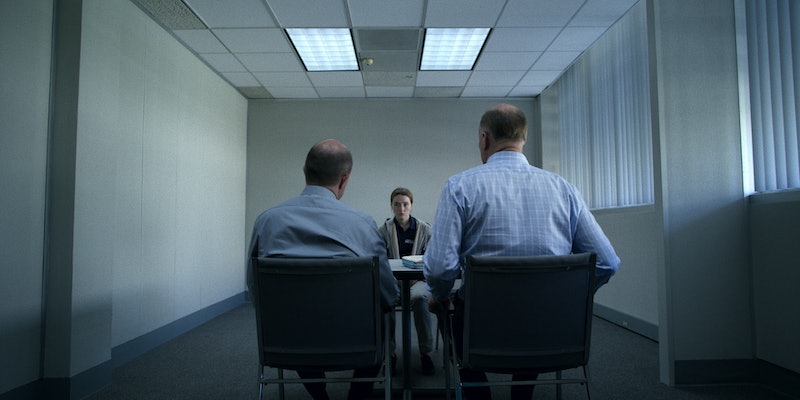 Content warning: this post includes discussion of sexual assault. Netflix's new crime drama Unbelievable is, at surface level, a gripping procedural about two detectives working intensely and tirelessly to catch a serial rapist. But it also tells the harrowing true story of a rape survivor who was not believed — and the deep, untenable ways the men investigating her case failed her. Unbelievable, then, is not just a plea to believe survivors, but to overhaul the way law enforcement handles sexual assault cases entirely.

The show opens with Marie, a Washington woman who was raped after a man broke into her apartment. The police start investigating her attack, but after one of her former foster mothers raises doubts about the veracity of her story, the detectives begin to hound Marie about inconsistencies in her account. Eventually, she agrees to say that she made it all up, and she's later charged with filing a false report. Three years later, two Colorado detectives working a set of entirely different cases arrest a serial rapist and find evidence linking him back to Marie — proving, finally, that she was telling the truth from the beginning.

The show as a whole highlights a number of misconceptions about trauma and rape, but the way Marie's case was mishandled, in particular, shows exactly why sexual assault cases should require special training — something the Washington officers didn't have. (According to the Pulitzer Prize-winning article Unbelievable is based on, the lead investigator for Marie's case had previously only worked one or two rape cases, while one of the two detectives who ultimately caught her attacker had worked on more than 100).

For one thing, it's not unusual for rape survivors to misremember details about their assault. As Jim Hopper, a clinical psychologist who trains investigators on the neurobiology of sexual assault, tells Bustle, our brain is already hard-wired to encode certain "central" details and forget other "peripheral" ones — but "when you're in the midst of [a traumatic event], what grabs your attention may not be what you think it will be," he says. So while police may need to know how tall the attacker was or what color shirt they were wearing, "what was central to the victim may be peripheral to the investigation" — which can in turn fuel doubt. "[The cop might think], 'Well, if it was me I would have remembered this,'" but that's the prefrontal cortex — which is impaired during trauma — talking.

Survivors' memories are only worsened by the stressful environment of police questioning, which, as we see play out when Marie is continuously interrogated by the Washington detectives, can hinder memory retrieval.

"If you're sitting there across from an investigator who doesn't convey warmth and care and empathy and understanding, who's not connected and empowering you, then you are going to feel unsafe with this person — it's just going to stress you out," Hopper continues. The more you're pressed for details, the more stressed you get, and thus the more fragmented your memory becomes. "The guys are like, 'Well how come you don't remember this? Well how come you don't remember that?' It's a vicious cycle."

Instead, the key to interviewing rape survivors is using an "open-ended, narrative approach that elicits sensory details," investigator Tom Tremblay and clinical psychologist David Lisak told Slate. This means asking questions about what they smelled, felt, or heard in order to slowly gather information — a method that goes against everything police are traditionally taught about setting up key facts and a set timeline.

In Unbelievable, Colorado detective Karen Duvall (Merritt Wever) employs this method with Amber, gently asking her about any details she can recall. And in the end, it's Duvall — along with veteran detective Grace Rasmussen (Toni Collette) — who solve the case.

Of course, Unbelievable is far from the first time scrutiny has been raised about the way rape cases are investigated. And slowly, some changes have been made, even across the globe. In Zanzibar, they've created a "gender desk" in the police station where women can report an assault to someone — often another woman — specially trained in handling "sexually based offenses." And in Denmark, Amnesty International researcher Helle Jacobsen has been pushing to change the country's "antiquated" definition of rape so that police understand the definition of rape is any sexual encounter without consent, not just a sexual encounter in which a woman is brutalized enough to be visibly and plainly believed.

If anything, Unbelievable underscores the urgency and importance of implementing this training widely and swiftly. At the end of the show, Marie asks the Washington detectives to "do better" for survivors in the future. This is how they can.