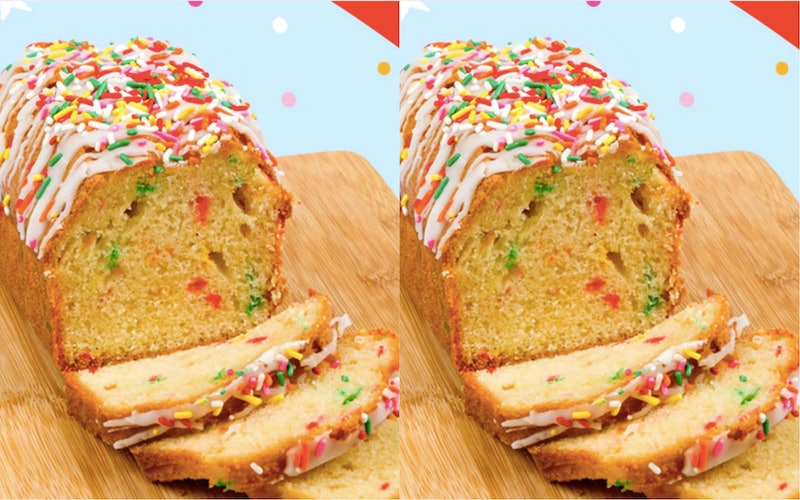 Just when you thought the “unicorn food” trend was abating, a new competitor has entered the ring: Unicorn Bread, a rainbow-sprinkled concoction by Arizona bakery Bakehouse Bread Company. But if you’re curious about exactly where to get Unicorn Bread… well, I have some bad news for you: It’s only available for a limited time, and only at a very specific chain of stores. According to a post on the Bakehouse Bread Company Facebook page, their Unicorn Bread is available for purchase at Kroger stores throughout the month of April. Act fast, because it’s probably going to go incredibly quickly.

Kroger saw its beginnings in 1883 in Cincinnati, when Barney Kroger opened a grocery store located at 66 Pearl Street. In the 135 years since, that single grocery expanded into a retail empire; Kroger currently has 2,800 stores in 35 states under around 24 different banners. It is somewhat regional, though — I’ve lived in four different states over the course of my life, and it’s only now, as a 30-something, that I actually live near enough one to be considering making a trip to it right now.

Bakehouse Bread Company, meanwhile, is a much more recent company than Kroger: It dates back to 1995, when John and Nancy McKearney moved from Michigan to Arizona with plans to start a business together. They opened their first location, Village Bakehouse, in 1996; by 1997, a variety of stores in Arizona stocked the bakery-café’s products; and in 2002, the McKearneys sold Village Bakehouse and started Bakehouse Bread Company with the intention of focusing on wholesale.

They create both savory loaves and sweet loaves — and I think it’s safe to say that their Unicorn Bread falls firmly under the “sweet” category. It looks essentially like a funfetti bread or loaf cake: The golden loaf is both shot through with rainbow-colored sprinkles and topped with them, with a sweet glaze adding the finishing touch. And as for how it tastes? Junk Food Mom — the Instagram account which recently introduced us to Sour Patch Kids ice cream — reviewed it in a post, saying, “This is basically a pound cake with sprinkles baked in, topped with a white sugar glaze and more sprinkles.” Despite the fact that it’s not quite as magical as it might seem, however, Junk Food Mom noted that it’s “still fun and delicious.”

Right now, though, the bread is only available at Kroger locations, as confirmed by a response to a query about where it can be found on Bakehouse Bread Company’s Facebook page. That post includes a shot of the product label, too, so if you’re curious about what’s actually in Unicorn Bread — well, here you go:

If you’ve got allergies, you might want to stay away from it, unfortunately, since it both contains egg milk, soy, and wheat, and could potentially come into contact with dairy and tree nuts due to the facility in which it’s processed.

If the phrase “unicorn bread” sounded familiar to you even before the mentions of Bakehouse Bread Company and Kroger, there’s a reason for that: This is far from the first time we’ve seen something called “unicorn bread” capture the internet’s heart. In April of 2017 — which, I’ve just realized, is exactly a year ago, so, uh… how’s that for a coincidence? — a two-ingredient recipe for unicorn bread swept the viral scene, notable for the fact that those two ingredients were ice cream and bread flour. It sounded unbelievable: Seriously? You just mix together ice cream and a specific type of flour and add some food coloring if you’re feeling fancy… and you wind up with something resembling pound cake? Surely not! And yet, that is exactly what happens. Ice cream bread itself has actually been around for a couple of years — if you search Google or YouTube, you’ll find recipes dating back to at least 2013 — but positioning it as “unicorn bread” gave it some extra oomph.

So, I mean, hey, at least if you miss out on Bakehouse Bread Company’s Unicorn Bread, you can still make something resembling it at home, right? And, honestly, I wouldn’t be surprised if Bakehouse’s treat ends up being tough to find — knowing the current cultural obsession with unicorns, I’d be willing to be that it’s going to go fast. You can find your nearest Kroger location here, but if I were you, I’d go the extra mile and actually give the store a call to check if they’ve actually got Unicorn Bread in stock before you go through the trouble of making the trip. According to a price tag spotted on one Instagram post, it'll cost you around $5, although be aware that it's possible there might be differences depending on your market.

Good luck! And may your road be forever paved with rainbows!