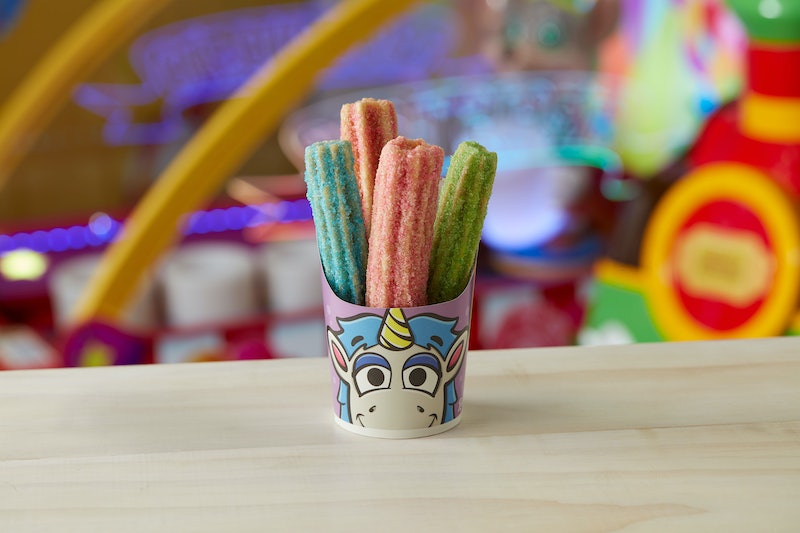 National Unicorn Day is April 9, just in time for you to buy a unicorn and ride it to the post office to mail your taxes to the IRS. If you’re looking for ways to celebrate National Unicorn Day — and let’s be honest, who isn’t?— Chuck E. Cheese’s is offering Unicorn Churros for a limited time only. They’re churros! They’re unicorn themed! They will, for a moment, make you say “Should I, an Adult™, go to Chuck E. Cheese’s?”

Available from April 8 through June 6 for $3.99, Chuck E. Cheese’s nationwide will have churros dusted with pink, green, and blue sugar. Each sugar dusting corresponds with a different flavor: green for green apple, blue for blue raspberry, and pink for cotton candy flavors. In other words, they are candy flavored churros. And they are multicolored. Thus, they are unicorn-themed and we will honor them accordingly.

The Unicorn Churros come in a container with a sleepy-looking cartoon unicorn. This, I’m assuming, is Ronnie the Unicorn who is part of Chuck E. Cheese’s character canon. Ronnie (whose name — and I am 100 percent serious — is short for Ronaldo Sagittarian) is a unicorn with a blue mane and multicolored sparkly stars on his body. He is denoted by the Chuck E. Cheese’s fan wiki as “somewhat of a reporter.” I am not sure what his involvement in these new Unicorn Churros is, but here’s a ten-minute video of Ronnie reporting about pizza.

Chuck E. Cheese’s (which is short for — and I can’t stress enough how much I wish I were joking — Charles Entertainment Cheese) also sells non-Unicorn churros if that’s what you’d prefer. And to answer the question you are trying to keep yourself from asking: yes, a childless adult can go into Chuck E. Cheese’s, according to Quora, Reddit, and other unaccompanied adults who have come before you.

Chuck E. Cheese's also serves beer and wine at some locations. Just something to keep in mind next time your office wants to organize a happy hour. However, if you don’t want to brave the inside of a Chuck E. Cheese’s, you can send up a prayer that the Unicorn Churros will be made available on DoorDash, Uber Eats, and GrubHub a la the chain's Valentine’s Day deal.

On April 9, National Unicorn Day itself, families can get an order of Unicorn Churros for free when they purchase 30 minutes of All You Can Play. (That’s where parents can pay $10 for their kid to play as many games as they want/are able in half an hour. It is one of the more affordable alternatives to getting a babysitter.) According to an email from Chuck E. Cheese's, kids can also participate in the #UnicornItChallenge by posting a picture “with their hair in a unicorn horn” to receive a non-disclosed surprise. No word on whether adults can/should participate in the challenge.

If you’ve been anywhere near the internet in the last month, Chuck E. Cheese’s has probably been on your mind. In early February, a conspiracy theory around Chuck E. Cheese’s pizza surfaced after YouTuber Shane Dawson posted a video alleging that the chain recycled its pizza. 29 million views and a flurry of tweets later, the theory went fully viral. People posted photos of the pizzas, suggesting the pies looked cobbled together, slice by slice. People made diagrams trying to explain why sometimes the cut lines don’t appear to be consistent or line-up in the pizzas. People were talking about Chuck E. Cheese’s like this was a fifth-grade birthday party they weren’t invited to but didn’t want to go anyway and it’s fine and they’re totally over it.

Spokespeople for Chuck E. Cheese’s have repeatedly responded to the claims, denying any truth to the recycled pizza theory. (Chuck E. Cheese’s Twitter replies the week of February 12 look like an ad school lesson in managing brand backlash.) “The claims made in this video about Chuck E. Cheese’s and our pizza are unequivocally false,” one spokesperson told The Verge. “No conspiracies here — our pizzas are made to order and we prepare our dough fresh in restaurant, which means that they’re not always perfectly uniform in shape, but always delicious.”

You can give the new Unicorn Churros a try and see if they taste like recycled pizza crusts. KIDDING. They are made from recycled unicorns though.

(Please calm down, I am still kidding.)