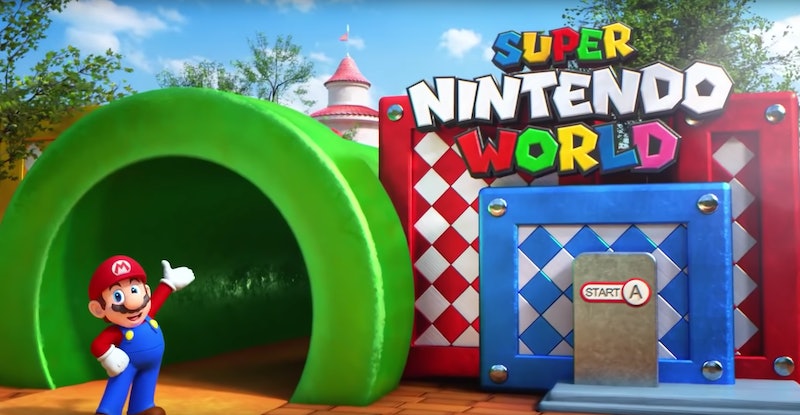 Debuting this summer at Universal Studios Japan, Super Nintendo World is set to be one of the most innovative projects for the theme park to date. Following the success of the Wizarding World of Harry Potter, the new themed expansion will provide guests with the opportunity to explore the Mario universe IRL. This experience won’t just be confined to Japan, as the theme park unit has confirmed that Super Nintendo World will be part of Universal Orlando’s latest expansion, Epic Universe, too.

Last October, Universal announced that Epic Universe would open in 2023. No further details were revealed of what would be in the park, other than an ambiguous piece of concept art, the name, and logo. So Super Nintendo World marks the first confirmed "land" at Epic Universe, which had already been rumoured by theme park blog Orlando Park Stop who noticed that a section of the park to the west that looked suspiciously like Osaka’s Super Mario World plans. It’s currently not known whether Super Nintendo World will open with Epic Universe in 2023, or whether it’ll open within the park at a later date.

The resort currently consists of three theme parks, which are accessible from Universal Boulevard. Universal Studios and Islands of Adventure occupy the same piece of land, while the water park Volcano Bay sits across Hollywood Way. Due to limited land in the immediate area, Epic Universe will be situated a few miles south of the main resort, with land already being cleared north of the Orange County Convention Centre.

Land clearing for the park has already begun on the 750-acre site, and as Travel Pulse writes “construction on the facility is expected to kick into high gear next year.”

Rumour has it that, alongside Orlando, the Universal Hollywood and Singapore resorts will also be getting Super Nintendo Worlds of their own, although nothing has been confirmed quite yet.

Guests can already get a glimpse at what attractions will be included in the Orlando version thanks to Japan. As Park Stop explains, every Nintendo World park will feature a Mario Kart ride as its signature attraction. But depending on the space available in each park, guests may see a difference in available rides. For example, Japan will reportedly have two rides instead of three, seemingly excluding the Donkey Kong rollercoaster that may feature in Orlando.

Other than the Mario Kart ride, there hasn’t been any official announcement on other attractions that will feature in the land. There have been rumours of a Yoshi and Donkey Kong ride thanks to supposedly leaked patents for both rides, but neither has been featured in any announcement.

Universal Japan recently released a music video in collaboration with Charli XCX for the park, which included a sneak peek at the ride vehicle for the Mario Kart attraction. It also features a first look at how guests can interact with the world, which will be through the ‘Power Up Band’.

As Tampa Bay Times writes, these bands will be “themed to various characters, to immerse [guests] in the video game universe.” Visitors will have to purchase the bands at Epic Universe, but they will link up to an app where users “will be able to see their body movements reflected in characters”, and will have the opportunity to “collect digital coins and battle enemies.”