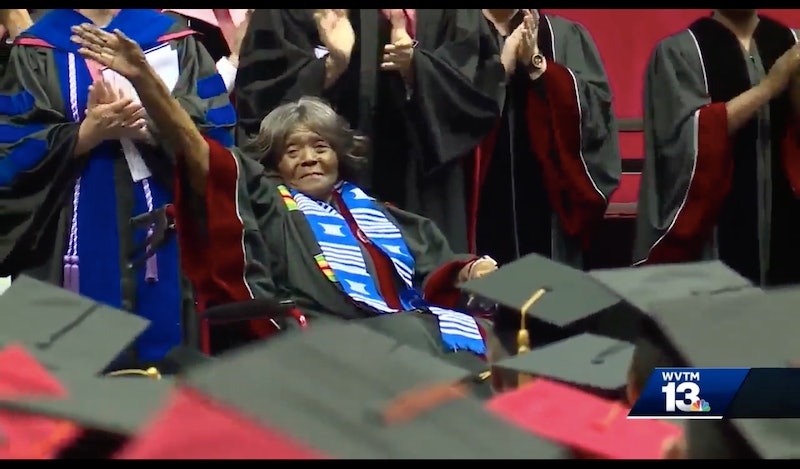 At the University of Alabama commencement ceremony last week, all eyes were on a trailblazing woman who made history once again. On Friday, Autherine Lucy Foster received an honorary doctorate from the school 63 years after she was prohibited from continuing to attend classes due to her race. Lucy Foster was the first-ever black student to attend the University of Alabama — and was removed from campus after just three days due to rioters threatening her safety and life.

The university awarded Lucy Foster, who is now 89, with an honorary Doctor of Humane Letters at last Friday's commencement services. In its news bulletin announcing Lucy Foster as a recipient of the degree, the university commended her for changing the tide of history. "She was the architect of desegregating Alabama’s education systems, as she became the first African American to attend a white school or university in the state of Alabama," the university's announcement noted.

As USA Today described, Lucy Foster initially applied to the school in 1952. However, she had her acceptance rescinded due to her race, as school administrators decided they would not be admitting African American students to the university. Lucy Foster went to court to fight this decision and subsequently had her admission restored, with a plan to attend the school again beginning in 1956, the outlet reported. However, after she was on campus for just a few days, she was removed from the university due to the threats against her. As the New York Times reported in 1992, the university's board cited Lucy Foster's safety and that of others as the reason for the expulsion.

The paper also noted that Lucy Foster's expulsion was still active when she went back to campus in 1988 to speak with several classes about her experience at the school. When university professors discovered that she was potentially interested in re-enrolling to pursue a master's degree, they assisted Lucy Foster in having her expulsion invalidated, the New York Times revealed. The trailblazer then re-enrolled at the school and earned a master's degree in education in 1991, NBC News noted.

Right before she received her honorary doctorate on Friday, Lucy Foster reflected on the momentous occasion with the Tuscaloosa News, telling the paper:

I sat down last night, and when I thought about it, I was crying. The tears were just rolling down my eyes because it is so different and so unique for me to be able to come to such a university as this. That is a wonderful campus out there ... The [experiences] are so different. And the difference is that the crowds here, I see laughing faces instead of frowning and displeased at my being here ... That is much better than seeing someone frowning as if they don’t want you here.

As NBC News noted, Lucy Foster received a standing ovation as she accepted her honorary degree on Friday. It's very clear that Lucy Foster serves as an inspiration to many, showing extensive bravery and courage as she faced hardship and discrimination.