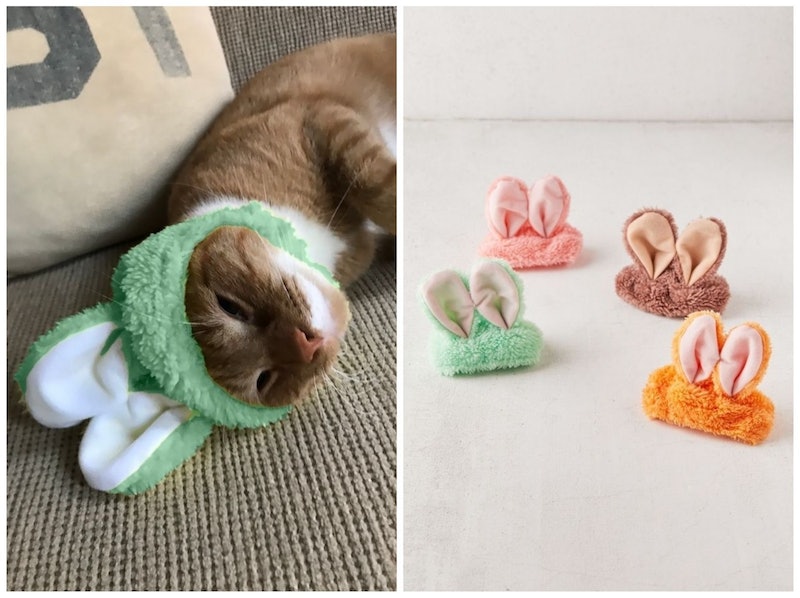 Cat people, get ready for the best thing you will see all day: Urban Outfitters sells hats for cats now. They’re not the Dr. Seuss variety — that is, even though you can make your cat a cat in a hat with them, you can’t make your cat into the Cat in the Hat — but you know what they can do? Make your cat look like other creatures. I can’t promise your cat won’t hate you for it if you try to shove one on its head, but, uh… well, it’s worth a shot, right? Besides, your little friend might surprise you. I recently discovered that one of my own cats not only doesn’t seem to mind the little tie-and-shirt-collar my spouse recently got for her, but moreover, she actually seems to like it. Is she a weirdo? Yes. Is she a cute weirdo? Absolutely. And you’d better believe she knows exactly how cute she is.

Dressing pets up in ridiculous outfits is obviously not a new phenomenon; heck, it’s such a firmly-established practice that there is actually a Wikipedia page for “Dog’s fashion” already in existence. (For the curious, the page was created in March of 2015, according to its edit history.) Indeed, as Vox’s history of pets in Halloween costumes notes, people — namely royalty and the very wealthy — were decking their dogs out in blinged-up collars in ancient times. Actual outfits didn’t come along until later, when both Charles VIII of France and Queen Victoria (trendsetter that she was) had clothing made for their puppers; now, though, pet clothing is more accessible than ever — and even if you don’t try to cram your furry pal into an entire ensemble, you can still plop a hat on their tiny little head.

Which brings us to Urban Outfitters’ unexpectedly sizable cat cap collection. PopSugar gets the credit for bringing the hats to our collective attention; the fact that you can order them online is obviously essential information for our everyday lives, and I am incredibly thankful that I now know about them. Alas, several of the hats highlighted by PopSugar are no longer available, including the bear caps, the Rilakkuma caps, and the Sumikko Gurashi caps; however, there are still plenty of options that are available, depending on what you want your cat to look like.

A piece of fruit?

You’re good there, too.

There’s even a selection of fuzzy bunny hats, as long as you don’t mind waiting a bit; they’re on backorder until April 18.

They’re all about $8 a pop, and can be ordered online for delivery or for pickup at your nearest brick-and-mortar UO location. The fruit hats come in six varieties, including a pineapple hat, an orange hat, a cherry hat, a banana hat, a pear hat, and what looks like maybe a peach hat; the “aquarium” hat collection includes a crab hat, an orca hat, a yellow and blue fish hat, a blue squid or octopus hat, a… walrus hat (maybe?), and a… pink… shrimp hat, I think? (It’s not totally clear); the mammalian/cephalopod set includes a penguin hat, an otter hat, and a white squid hat (or at least, I think it’s a squid); and the bunny hats come in four different colors: Pink, green, orange, and brown.

The one downside is that, if you order online, you don’t to choose which specific hat from each set you get: In the product listings, the single color option is described simply as “assorted,” with a note placed in the “Details” section stating that UO will “pick out one of [the] assorted designs” for you “as a special surprise.” So, if you order, say, one of the fruit hats hoping you’ll be able to dress your cat up as a pineapple, there’s no guarantee you’ll get that particular hat; you might end up with an orange instead.

They’re all adorable, though, so really, you’ll be a winner either way. Your cat may not view it as such, of course — but it’ll be worth it for that one hilarious photo you’ll be able to take of them wearing it before they claw it off of their little noggin and rip it to shreds.