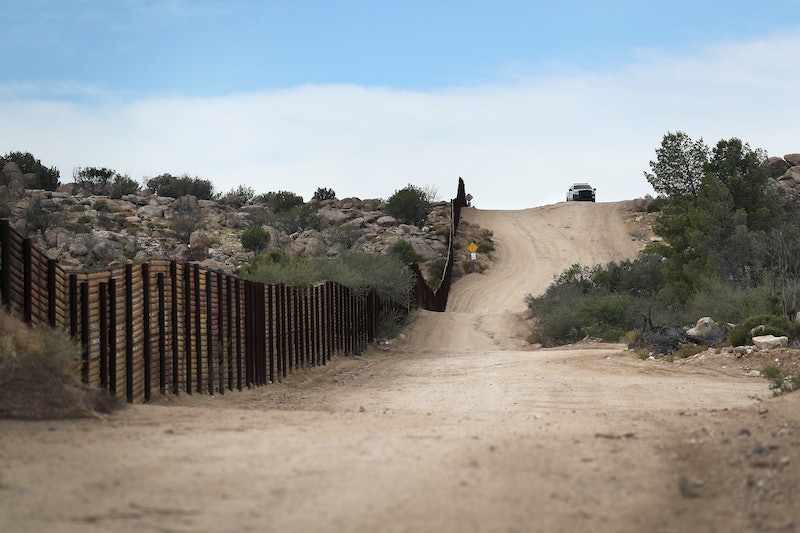 A new report alleges that U.S. Customs and Border Protection is making it harder for potential undocumented immigrants to make the journey across Mexico and into the U.S. According to a report from two humanitarian organizations, U.S. border patrol agents regularly destroy water and supplies left by aid groups for border crossers, making it far more likely that people will die of thirst.

The report was compiled by the aid groups No More Deaths and Coalición de Derechos Humanos (the Coalition for Human Rights), which together have been putting together a series of reports on the perils of border crossing. This series, titled "Disappeared," will eventually have three parts, discussing the "crisis of death and disappearance" happening on the U.S.'s southern border. The reports argue this crisis is largely created by the policies and practices of the CBP.

In order to collect the data, volunteers went out along the border to inspect supplies that had been left for migrants attempting to cross the border. In total, they found that more than 3,500 gallons of water had been tampered with between March 2012 to December 2015. Those sabotaging the water supplies would destroy the containers so as to get rid of the water and make the bottles unusable for the future; the report states the border patrol destroyed food and blankets, as well.

The report points out that while other actors — like local fauna, hikers, and members of various border militias — do sometimes destroy the water supplies in other ways and for other reasons, CBP agents apparently play an extremely outsized role. In total, the report says that animals destroyed 533 gallons — whereas humans were responsible for the destruction of 3,586 gallons.

Through video evidence and geographical analysis, as well as personal experience, our team has uncovered a disturbing reality: US Border Patrol agents participate in the widespread interference with essential humanitarian efforts.

Part of this conclusion is based on the fact that the border crosses through land belonging to different groups, including private land, national parts, and state trust land, and CBP agents are often the only people with access to the areas where water supplies were destroyed. As the report concludes:

The practice of destruction of and interference with aid is not the deviant behavior of a few rogue Border Patrol agents, it is a systemic feature of enforcement practices in the borderlands[.]

In hot, dry conditions like those found in the desert that the border mostly runs through, a person can lose up to 1.5 liters of water an hour in sweat. Those attempting to cross the border, however, can rarely carry more than seven liters when they make the journey. Water supplies left along the border can thus become a matter of life and death.

In response to the report, a spokesperson for CBP told The Guardian that while he could not dispute the accusations of agents purposefully destroying the supplies before personally looking at the report, the CBP does also frequently save migrants' lives through their patrols and desert rescue beacons.

The humanitarian groups' reports do not reflect CBP in a favorable manner, however. The first section, called "Deadly Apprehension Methods," details the CBP practice of chasing migrants into the desert, effectively weaponizing the hostile terrain. The report claims that this strategy has been responsible for tens of thousands of deaths and disappearances. CBP, however, claimed that the fault lies, instead, with the smugglers who accept inflated sums of money to take migrants north towards the border.

Smugglers lie, telling their "customers" their passage will be safe, but in reality, the terrain is treacherous and the conditions are extreme. Many are led to their deaths by smugglers more concerned about making money than they are about the lives of others.

CBP further stated, according to The Guardian: