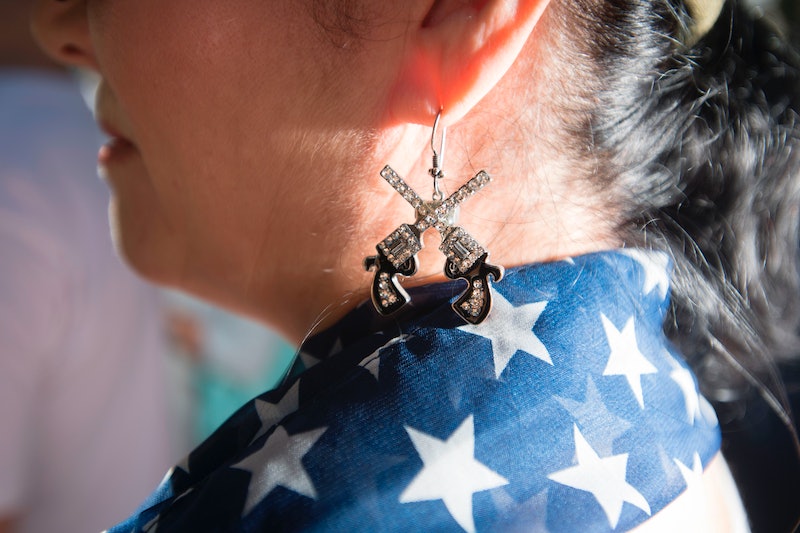 The United States just surpassed another record: now 59 deaths is the maximum number of Americans killed in a mass shooting. After the Pulse LGBTQ nightclub attack last year, the Aurora movie theater shooting, and even the Sandy Hook elementary school massacre, nothing has changed. If anything, gun laws at the state and local level have grown, with more concealed carry laws. Since we have no successful policies in the U.S. to consider, it's time to look abroad. American's gun laws compared to other countries will frustrate you — especially Australia's — because they show that swift and effective action can be taken.

There's a small chance that something will be passed this go around. For the time being, Republicans are just kicking the can down the road, perhaps waiting for the outrage to dissipate. En route to Puerto Rico, President Trump claimed, "We'll be talking about gun laws as time goes on." Both Mitch McConnell and Paul Ryan repeated calls for letting the "dust settle" and to wait until the investigation is over. That may pacify their GOP base, but it doesn't do much to change the situation in the country.

But imagine if they were willing to consider a legislative solution to the recurring gun massacres our country faces — it's important to know what version would work best. These are how the laws work in a couple other countries, according to the Library of Congress, which has studied different legal approaches to gun ownership around the world.

This country has some of the toughest laws on gun ownership in Europe, and has far fewer firearms per capita than other countries like France and Norway. According to the Library of Congress, the country's constitution doesn't prohibit their ownership, but laws limit their ownership to people whose jobs require them, those who need them for self protection (just 8,000), or those who use them for hunting. In total there are just 1.1 million civilians with licenses to own 3 million guns, according to the country's paper of record, El País.

Here the gun laws are perhaps the strictest in the world — the small Asian country hardly allows guns at all. There are exceptions, though not for ordinary citizens, and the punishment is imprisonment and "caning" (physical punishment usually with a cane). If you try to use a weapon, the punishment is death.

According to the Library of Congress, if you have two or more guns, it is assumed you are trafficking arms, and you can be punished by by death, or life in prison with "caning."

Unlike Singapore, the United Kingdom, has some exceptions, but it's still extremely tough. Handguns are not permitted among the general populace, but there are allowances for firearms and shotguns that can be obtained from the police — only if one meets the criteria (self defense is not seen to be a reason). Keeping the weapon safe and locked up is a consideration for being approved, according to the Library of Congress.

Perhaps our neighbor to our north can teach us a thing or two. Despite sharing plenty with us culturally, there are far fewer gun deaths in Canada — the United States' gun homicide rate is five times higher. They have three types of gun classifications: unrestricted, restricted, and prohibited. Shotguns are generally not restricted, but some can be; semi-automatics are restricted, while handguns tend to be prohibited. There are also restrictions on fully automatics and other similar firearms.

You must get a license to acquire a firearm, and then restricted firearms must be registered, the Library of Congress explains. There are also all sorts of checks, including criminal and psychiatric tests.

Australia is perhaps the best example for the United States to look towards immediately following a mass shooting like Las Vegas. Back in 1996, 35 people were killed in a mass shooting in Tasmania, known as "the Port Arthur Massacre." In the wake of this shooting, the federal government (under a conservative coalition) passed a law banning all automatic and semiautomatic firearms. They also started a buyback program that took more than 650,000 guns out of circulation.

Now, according to the Library of Congress, both licensing and permitting apply to anyone looking to buy a gun. They would need to take a safety class and provide a reason for needing a gun, and that couldn't include self-defense. Then they must meet storage requirements that include keeping ammunition stored separately — inspections are also possible — and there is also a waiting period of 28 days. Further limits on handguns passed in 2002. Since the law passed, there have been no more mass shootings, and gun deaths are down by the double digits.

All of the stricter versions of gun control seen in these five countries would be an improvement over our current patchwork system. Of course, there would need to be a transition period — putting people to death tomorrow for owning a gun like in Singapore would be implausible in the U.S. But even for that, there is the example of Australia: A gun buyback program could prove a good piece of the difficult puzzle.

Congress can and must look at these options, come up with a version that works for the United States, and pass it before there's another massacre like in Vegas, Orlando, Newtown, or countless other places across the country.