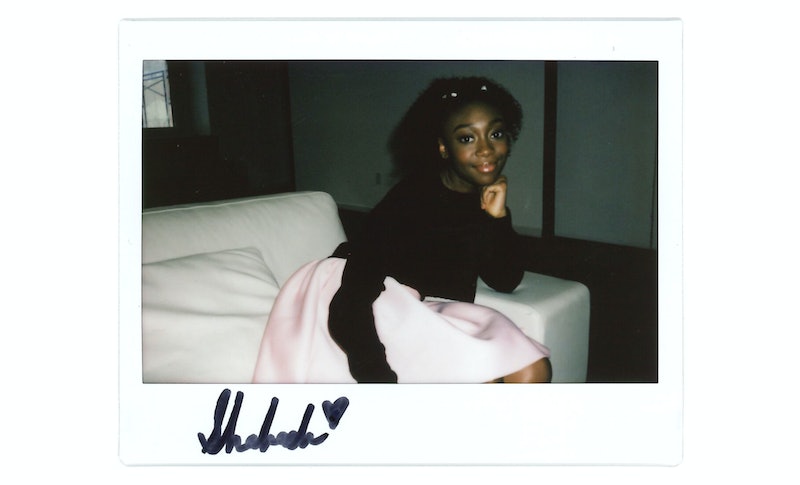 When celebrities hang out with Bustle writers, we want to give them the chance to leave their mark. Literally. So we hand them a pen, a piece of paper, a few questions, and ask them to get creative. The rest is up to them. This time, Us star Shahadi Wright Joseph is leaving her mark in the Bustle Booth.

What would you do if Oscar-winning filmmaker Jordan Peele called you personally to invite you to star alongside fellow Oscar winner Lupita Nyong'o in his followup to Get Out? Shahadi Wright Joseph, who plays girl-next-door Zora Wilson and her creepy Tether Umbrae, did a cartwheel.

The 13-year-old isn't new to the business by any means. Joseph has been performing for years, primarily on stage, starring on Broadway in The Lion King and School of Rock, and booking a pretty plum featured role in 2016's Hairspray Live! But creating two distinct characters for a major Hollywood feature film was still a tall order, especially since the whole project was so mysterious.

"I really had no idea until a couple of weeks ago," she laughs when I ask what she thinks Us means. "I don’t know why, but I felt like I’d gotten too far in the process that I was scared to ask Jordan."

Most adults are still reeling from the freaky blockbuster anyway, and it all gelled eventually. Joseph was too focused during filming on differentiating the jaded teendom of Zora from her "evil" self ("[Peele] just told me, 'If Zora can do something, Umbrae can do it much better.") and bonding with her onscreen parents and brother. She, Nyong'o, Winston Duke (Gabe/Abraham), and Evan Alex (Jason/Pluto) would have lunch together on set and even visit the amusement park — probably not as creepy IRL in the daylight — during downtime. "When we were playing the bad family," she says, "you could still see the chemistry that we had."

Next up, the young actor is recreating one of her very first theater roles, playing Young Nala in Disney's live-action remake of The Lion King, out in July. While Joseph never thought she'd be back in that character, she says she's always admired the lioness's "confidence — because she inspires so many little girls, especially me." The downside of voice acting is that she hasn't had a chance to meet her adult counterpart yet. Though, if there's an experience that could rival being chosen for Us, it's probably sharing a role with Beyoncé herself. So what's Joseph's game plan for when she finally meets her?

"Ooh, I don’t know," she says, eyes practically turning into stars. "I just want to tell her that she’s my queen."

When she's not buddying up with Academy Award winners and terrifying audiences all over the country, you can probably find Joseph watching (and re-watching) Unbreakable Kimmy Schmidt with her mom, in line at Starbucks, or putting together killer outfits. Find out what else this next-generation rising star is into in her Bustle Booth below.

More like this
On 'The Handmaid’s Tale,' Christine Ko Fights Back
By Gretchen Smail
'Grey's Anatomy's New Intern Got Advice From Dr. Bailey Herself
By Grace Wehniainen
Jinkx Monsoon Is About To Get Real Sketchy
By Sam Ramsden
The New Bachelor Will Be Announced Next Week & Here Are The Top Contenders
By Grace Wehniainen
Get Even More From Bustle — Sign Up For The Newsletter