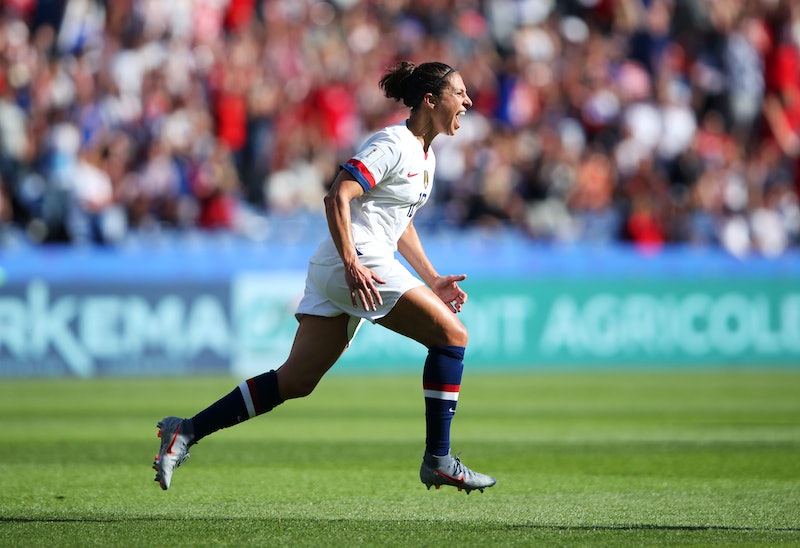 The U.S. Women's Soccer team is fighting one of the most visible battles in the war for equal pay between men and women, and the U.S. Soccer Federation just handed them a major piece of ammunition. According to audited financial reports from the federation, U.S. women's soccer games make more money than men's games now — and yet the women players are still paid considerably less than their male counterparts, The Wall Street Journal reported.

The U.S. women's soccer team is the world's most dominant women's soccer team, as The New York Times outlined as the team prepared for the 2019 World Cup in France. The men's team, by contrast, didn't even qualify for the 2018 World Cup. Right before this tournament, which the USWNT is trying to win for the fourth time, the team filed a lawsuit suing the U.S. Soccer Federation for alleged gender discrimination.

"Despite the fact that these female and male players are called upon to perform the same job responsibilities on their teams and participate in international competitions for their single common employer, the USSF, the female players have been consistently paid less money than their male counterparts," the lawsuit stated, per ESPN. "This is true even though their performance has been superior to that of the male players — with the female players, in contrast to male players, becoming world champions."

U.S. Soccer's legal rebuttal, on the other hand, directly argued that the differences in pay were “based on differences in the aggregate revenue generated by the different teams and/or any other factor other than sex,” according to The Wall Street Journal. In the past, as the paper noted, it's been true that the men's team made more than the women's team, but at the moment the roles are definitely switched.

In 2016 alone, The Wall Street Journal reported, the USWNT made $1.9 million more than the men's team. Between 2016 and 2018, the two teams' total earnings were $50.8 million for the women and $49.9 million for the men. These numbers represent game revenues, which for the women's team come mostly from ticket sales; according to The Journal, the men's team's revenues also reflect the game appearance fees that the team's opponents have to pay.

U.S. Soccer didn't comment for the Journal's article, and the paper also noted that there are other sources of revenue — like sponsorships and broadcast deals — which the U.S. Soccer Federation deals with together, so it wouldn't be possible to completely nail team the two teams' individual revenue totals beyond game revenue. Still, the fact that U.S. women's soccer games are pulling in more than men's in ticket sales could be a powerful point in the women's team's favor.

After all, as Vox noted, they scored more in their blowout win over Thailand — 13 goals — than the men have in every World Cup since 2006 combined. They're the favorite team to win this year's World Cup, according to Business Insider, and so far their play has entirely lived up to expectations. Because of their success, The New York Times wrote, they've actually played many more games than the men's team — but for less pay. And still, no matter how things go in this year's World Cup, the fight in court still awaits them at the end.