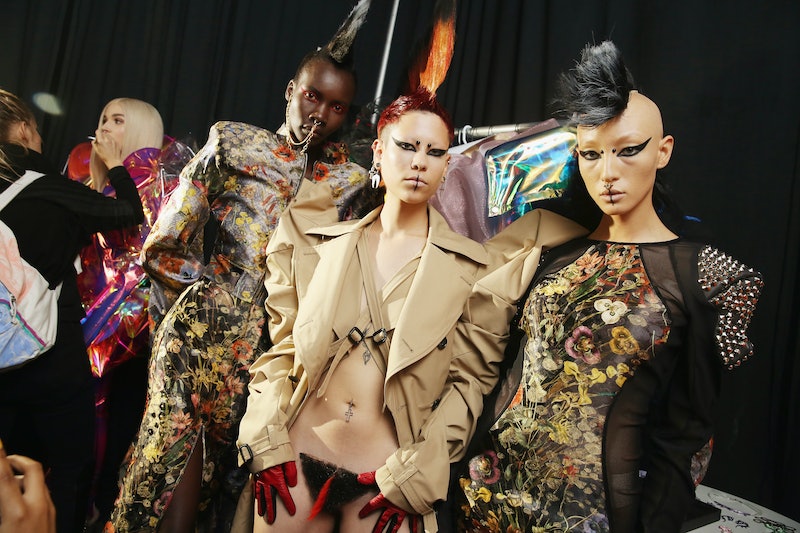 New York Fashion Week brings some of the strangest fashion trends. Just this year alone there were Flamin' Hot Cheetos, Red Bull, and popcorn on the runways. The latest accessory isn't exactly edible, but it's just as bizarre. As BuzzFeed found, vagina wigs were a thing at New York Fashion Week, thanks to the brand Kaimin. Yes, it's what you think they are. The faux hair, designed to cover the nether regions, might surprise you, but it's actually nothing new.

Models on the Kaimin runway wore a variety of different levels of clothing. Some sported holographic dresses and gowns, while others wore open coats and pubic coverings. The fan-proclaimed "vagina wigs" were, well, wigs that covered the models' crotches. While not every single person sported one, the ones that made sure that they were noticed.

Regardless of the color of the drapes, the vagina wigs were dark colored and of varying lengths. Some were just hair, others had a bright red stripe in them, and one even had hair extensions of their own.

According to BuzzFeed, the show wasn't about shocking their fans, but about spreading body positivity. The brand used products from the brand ANTI to show that all bodies — no matter their scars, hair, or outward appearance in general — are worthy of some time on the runway.

Believe it or not, this trend is nothing new. Although it might seem like the brand created this look for shock factor, there's actually a specific name for a vagina wig — merkin. The items dates back to 1450. Women used the faux hair to prevent the area from crabs and lice.

Glamour previous reported that women wore the public wigs and nothing else in public in the 15th and 16th centuries. They say that it was a way for women to maintain modesty, while they wore nothing else. There's some proof in the protection aspect of the wigs, too.

"We have pubic hair for a reason. It forms a protective barrier for the skin," Jennifer Gunter, M.D., an ob-gyn and director of pelvic pain and vulvovaginal disorders at Kaiser Permanente San Francisco, told Women's Health.

According to Advanced Dermatology's 2018 study, the groin is the number one most groomed place on the body. The study, called "A Hairy Situation," shows that 68 percent of women and 32 percent of men groom down there. They do so on average once a month, and start as early as high school.

With 2,000 people surveyed, the group also found that the number one reason that people partake in grooming are because of their partners. Among the top responses, friends and fashion also ranked among the top, with fashion being 26 percent of the reason.

So while pubic hair is a personal thing, there are a lot of outside aspects that go into the decision to groom or not to groom. Kaimin's runway show might have more influence on the matter than you might initially think. If this runway show can show off pubic hair in a positive, self-accepting light, then more people might think so personally as well.

Bottom line: Pubic hair and fashion have more of a correlation than you might think. By showing that bodies and pubic hair come in all shapes and sizes, the fashion world isn't just creating a shocking performance. It's also spreading the body love at the same time.

While people might not be running out to buy merkins any time soon, it was still a powerful runway show. Because the more diverse bodies, er, wigs that hit the runway the better,