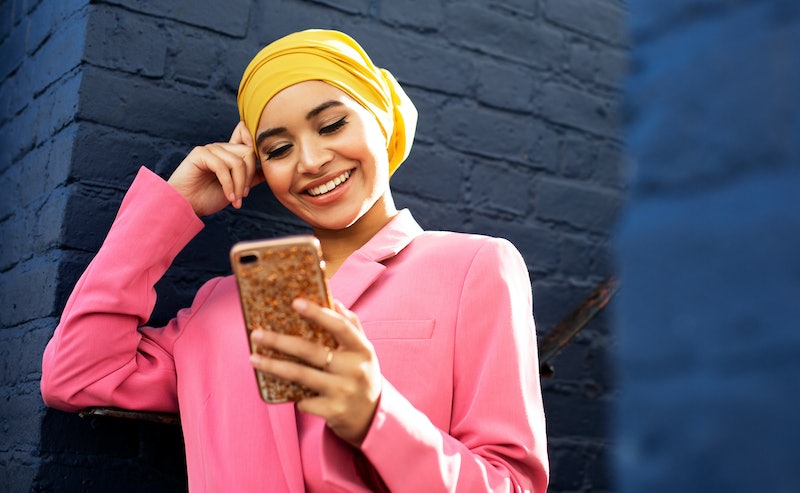 If you're single and don't want to be, Valentines Day can be a bit of a drag. With love hearts everywhere and people rushing to dinner reservations with flowers in their hands, it’s pretty hard not to think about your own love life. But is Valentine's Day a good time to be on apps? Starting up a flirtation with a new love interest on the most romantic day of the year may seem a little intense but, according to stats from some of the biggest apps out there, you may actually achieve more success than usual.

If you think Valentine's Day isn’t the time to be swiping, you’re missing a trick as research has found that the most romantic time of the year is a great time to start a conversation with your crush. In a statement sent to Bustle UK, Hinge revealed that 35% more dates are arranged on the night of Valentine’s Day than comparable days. Similarly, Facebook Messenger found that users engage in 20% more conversations on Valentine's Day, compared to the average day in February.

Dating app JigTalk recorded a 122% uplift in singles signing up to the service in the weekend leading up to Valentine's Day. Surprising, this stat was far higher than December's infamous 'cuffing season,' which saw just a 35% increase.

The Inner Circle found that, in 2019, they saw a 13% increase in the number of people joining the app on Valentine’s Day when compared to the same day the week before. CEO and founder David Vermeulen tells me, “We see a spike in activity around Valentines Day as singles use the day to reflect on their own relationship status." Along with the 13% increase in people signing up, they also saw an 8% increase in the number of messages being sent in comparison to the week before.

Over at Tinder, activity reaches an all-time high between Jan. 1 and Feb. 13. Last year, the total number of matches worldwide during that period increased by 40 million, on average. And Dating.com found that, globally, online dating activity increased by more than 18% between Feb. 1 and Feb. 14.

Starting a conversation with your crush is a pretty nerve-wracking aspect of online dating but it’s not the only thing you’ve got to think about. Plenty Of Fish found that people pay their profiles a lot more attention over Valentines Day. In fact, 36% of user said they use the time to update their pictures and 37% said they reply to more messages while 29% said they’re more likely to initiate new conversations on the run up to the holiday.

Striking up a conversation with someone over an app comes with a lot of pressure no matter what day of the year it is, but with engagement figures like these, it’s time to seize the moment.

More like this
8 Completely Unserious Tips To Make Your Cuffing Season A Success
By Ginny Hogan
10 Ways To Be More Empathetic To Your Partner
By Raven Ishak and Lexi Inks
Deliveroo Is Selling Lotus Biscoff Cinnabons Now
By Darshita Goyal
30 Clever Ways To Slide Into Your Crush's DMs
By Griffin Wynne, Carolyn Steber and Lexi Inks
Get The Very Best Of Bustle/UK