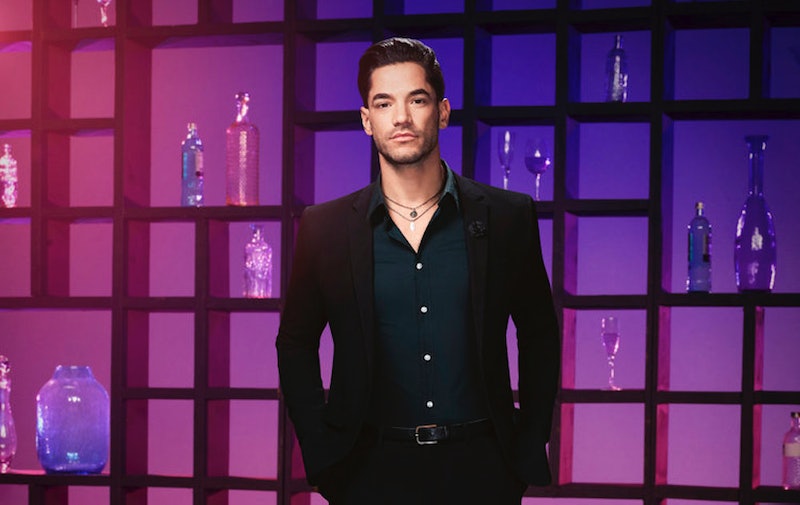 He may be new to Vanderpump Rules, but Brett Caprioni's Instagram shows he's already semi-famous. Before joining the show as one of SUR's new servers (alongside Raquel Leviss), Brett rose to stardom on YouTube. For six years, he's been sharing workout tips, day in the life vlogs, and more with his 500,000 plus subscribers; now, he'll likely be sharing them with a much larger audience.

Fellow Pump Rules star Jax Taylor told Life & Style that Brett started working at SUR in order to supplement his YouTube income. "He was in need of a job," Jax said. "He's a YouTuber, but needed part-time money so he wanted to bartend, so I'm kind of teaching him a little about that."

Anyone who's ever watched the show is probably like, wait, why is Jax teaching the newbie? And Jax agrees. "Believe it or not, I'm teaching him, which is kind of weird because I'm a terrible bartender," Jax said.

Godspeed to Brett in the bartending department — but that may not be the only only reason he sought out SUR. According to the Inquisitr, Brett previously dated fellow YouTuber Carli Bybel from 2013 to late 2017. Now, he may have eyes on a couple of SUR staff members. According to Brett's Bravo bio, he and Scheana may have a thing, and he's also interested in new SURver Dayna — who his friend Max has been flirting with, too. Sounds like a complicated love...square?

Aside from that impending drama, here's what you need to know about Brett from his social media.

He's Very Into Working Out

He has a whole side Instagram called BrettCapFit dedicated to his workouts and meal plans.

He Still Has Photos of His Ex Up

Some people purge their feed of photos of their ex after a breakup, but Brett's account is still filled with photos of him when he was with Bybel.

He's a Game of Thrones Fan

He and Bybel actually totally nailed these Khal and Khaleesi costumes.

Brett is very passionate about his vegan lifestyle, writing on Instagram that he chooses to eat this way to because it's sustainable and helps preserve animal life. He also believes that eating vegan helps you stay healthier in the long run.

Here's What Brett Would Look Like As An Old Man

Just for fun, here you go. This is what Brett would look like on Vanderpump Rules Season, like, 50.

For now, watch his debut during Jan. 7's Season 8 premiere.