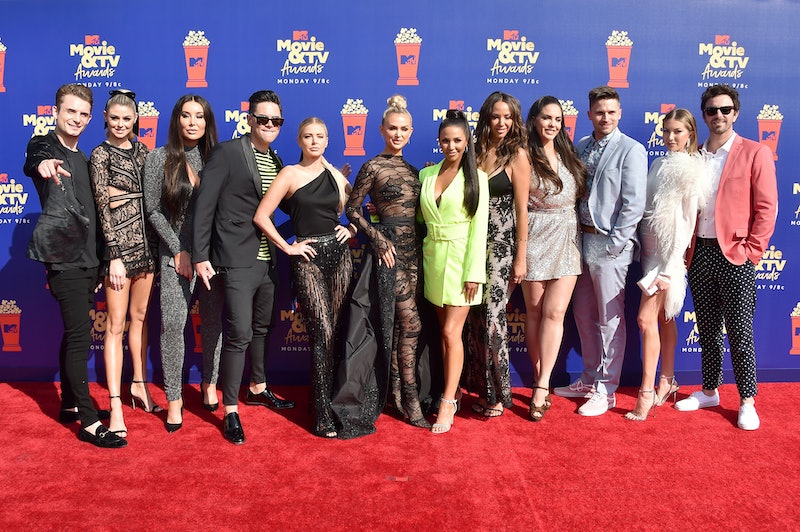 Bravoholics and Lisa Vanderpump defenders rejoice, the time has come: the new season of Vanderpump Rules is almost here. Lisa Vanderpump and her crew of SUR employees, past and present, return on Tuesday, Jan. 7 with plenty of hilarious hijinks, relationship troubles, and endless drama, some of which has already played out in the press. And knowing when Vanderpump Rules Season 8 was filmed will help fans keep track of it all.

Shooting in the summer before the season airs has become custom for the show. And given the clues that have appeared online and on social media, it seems that the new season was filmed over the summer of 2019. The Season 8 trailer, released back in November, included a sneak peek at Jax Taylor and Brittany Cartwright's wedding, which took place on Saturday, June 29. So it's safe to assume that the season was filmed in the months before their nuptials as well, especially given that basically every season of VPR has shown the cast at LA Pride, which takes place in early June.

Ariana Madix, James Kennedy, Katie Maloney-Schwartz, Kristen Doute, Lala Kent, Scheana Shay, Stassi Schroeder, Tom Sandoval, and Tom Schwartz are all returning for Season 8, alongside Jax and Brittany. But don't expect the couple's big day to be the only big event this season. Stassi got engaged to her beau, Beau Clark, in July, and while not confirmed, given the timing and how open they've been with their relationship, it seems likely that the moment was filmed for the show.

The cast also celebrated Stassi and Beau's engagement at Vanderpump's home in August, and given the location of Villa Rosa, fans will likely see that party on the show too. Stassi also confirmed to US Weekly that the cast was still filming episodes in October 2019, so there's definitely many exciting things this season from the summer going into the fall.

The cast also filmed new opening credits on Tuesday, Oct. 1, which was a sure sign to fans that the new season would arrive imminently. Sandoval gave a behind-the-scenes peek at the shoot on his Instagram stories, which also gave fans a look at some of the newbies. Brett Caprioni, Charli Burnett, Danica Dow, Dayna Kathan, Max Boyens, and James' girlfriend, Raquel Leviss, all join the show as SURvers this season, and going by the trailer, their problems are eerily similar to the employees we know and love.

The entire VPR cast are sharing their summers with us once again, and fans are so ready for the drama.

More like this
'RHOSLC' Star Jen Shah Refuses To Do A Post-Sentencing Interview With Andy Cohen
By Brad Witter and Jake Viswanath
Everything To Know About 'RHONJ' Season 13
By Brad Witter and Jake Viswanath
Andy Cohen Apologized To Larsa Pippen After A 'RHOM' Season 5 Reunion Dust-Up
By Brad Witter
When Was 'Bling Empire: New York' Filmed?
By Karen Fratti
Get Even More From Bustle — Sign Up For The Newsletter
From hair trends to relationship advice, our daily newsletter has everything you need to sound like a person who’s on TikTok, even if you aren’t.