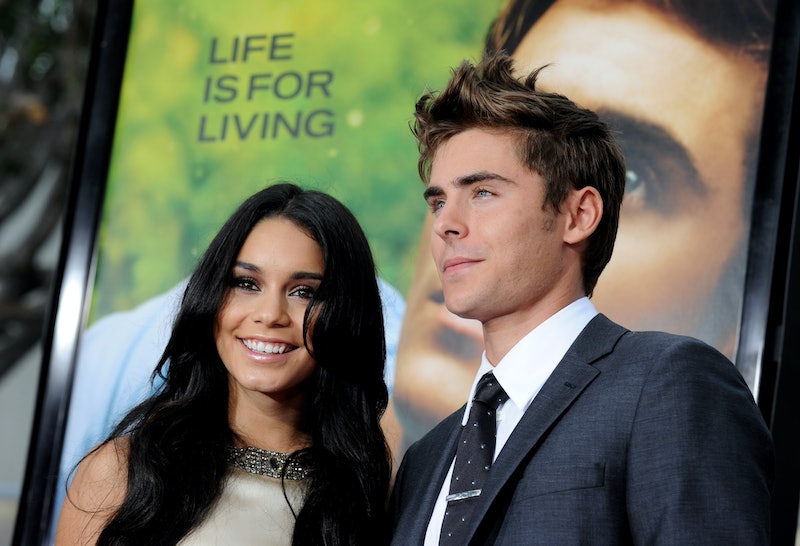 Zac Efron and Vanessa Hudgens broke up in 2010, but evidently, the High School Musical stars are still fielding questions about their relationship. Hudgens talked about dating Efron on The Hollywood Reporter's "Awards Chatter" podcast, and it sounds like there are no hard feelings between the two exes.

"It started off really organically," Hudgens said on the podcast, referring to her relationship with Efron. "And I could not have been more grateful to have that relationship at the time."

The Rent Live star went on to explain that the relationship "stabilized" her during the height of High School Musical's popularity. "It was this massive phenomenon, all of a sudden, and eyes were on me," she said on the podcast. "And it's just a really weird, foreign thing to go through. And by being in a relationship, it kind of kept me stabilized and grounded, and I had someone to lean on who was going through it as well."

During the podcast conversation, Hudgens also said that she and Efron "created a bond right from the start" during the High School Musical casting process. Apparently, there were multiple actors in consideration for the roles of Troy and Gabriella who were introduced to one another, but Hudgens knew Efron was the right Troy straightaway.

While Hudgens and Efron have long gone their separate ways, it's nice to know that they seem to have ended things on good terms, and they're both in a good place now. And considering the fact that the movie franchise shot both of them to instant fame, it's also nice to know that they were able to lean on each other throughout the experience. Their relationship wasn't forever, but it sounds like it was exactly what they needed at that time in their lives.

These days, Hudgens is dating actor Austin Butler, who, funnily enough, also has a connection to the High School Musical franchise. Butler starred alongside Ashley Tisdale in the spinoff Sharpay's Fabulous Adventure, which followed the aspiring star's journey to Broadway. The duo started dating in 2011, and they're still going strong to this day.

In a Nov. 2018 interview with Women's Health, the actor explained what makes her and Butler's relationship so strong. "He inspires me more than anyone. We both respect, trust, and admire each other. It’s so solid now because I feel strong as an independent woman. I am very self-reliant, but it’s nice to have a best friend you can share victories with as well as losses," she said.

Meanwhile, Efron has been keeping his personal relationships fairly private since his breakup from Hudgens. In a 2016 interview with U.K. outlet The Times, he talked about the struggles of dating as a well-recognized actor.

"Dating is something I’ll never be able to do," Efron told the outlet, according to Entertainment Tonight. "As in the dictionary definition of dating, because one way or another I've impacted that person's life and they'll soon realize it. A date has to be very long to dispel whatever people think about me."

Hudgens and Efron have moved on from High School Musical and from their relationship. But the franchise will always be one of the things the two actors are most recognized for. And fans can rest a little easier knowing how much they supported each other through it all.