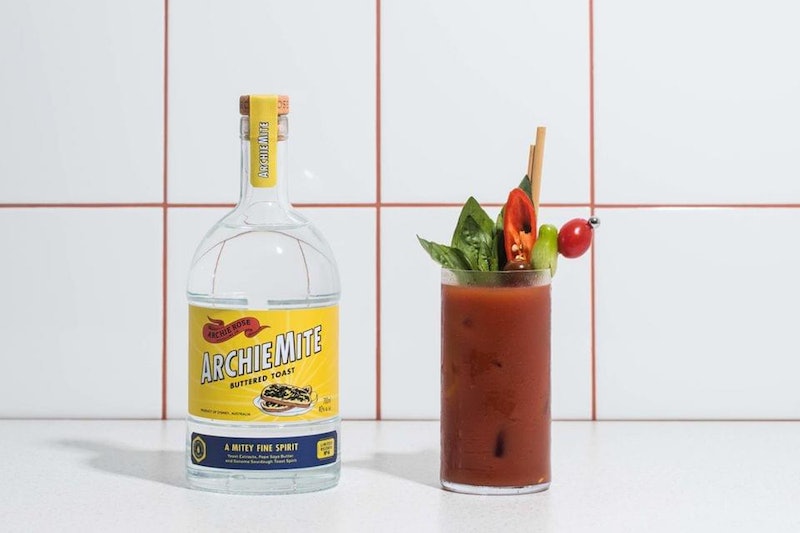 Vegemite is known more for being divisive than anything else. And now, a distillery has made something that will certainly have a similar effect on people: Vegemite-flavored liqueur. Depending on your feelings about Vegemite, this probably either sounds intriguing or repulsive.

Now, if you are someone who doesn't know what Vegemite even is or tastes like, clearly, that's important information here. Vegemite is an Australian spread made of brewer's yeast that is high in B vitamins. According to HuffPost Australia, "This brewer's yeast extract is indeed a by-product of beer manufacture and, along with salt, malt extract from barley, vegetable extract and B vitamins, it's what gives Vegemite its unique flavour." The article describes the spread as "salty and malty." It's thick and dark brown, and goes in and with a wide variety of foods, but is commonly served on buttered toast.

As reported by Food & Wine, the liqueur was created by Archie Rose Distilling Co. and is called ArchieMite Buttered Toast Spirit. It is meant to taste not just of Vegemite, but specifically of Vegemite on buttered toast. According to Mashable, ArchieMite "has been distilled with a handful of unnamed yeast-extract spreads (similar to Marmite, which is more popular in the UK)." The site reports that Vegemite isn't one of them, which is surprising, but apparently all yeast spreads have similar tastes. (Don't @ me, Australians! I'm just going off what I've heard!) The concoction is also made with 55 pounds of butter and 30 pounds of sourdough, so it tastes authentically like buttered bread.

According to the Archie Rose site, "This unaged spirit has a big, mitey character at the front followed by biscuity, bready notes. On the palate you’re given a combination of all three elements coming together - buttery, almost warm, crisp-edged toast with that umami-rich, savoury mite flavour."

The ArchieMite will be limited edition with 3,000 bottles being produced, and will go on sale Wednesday, May 8. The 700ml bottles will go for $79 AUD (or around $55 USD) and will be available online and at the Archie Rose Bar in Sydney, according to Mashable. In addition to the liqueur itself, the company is also selling ArchieMite tea towels — they're pretty cute.

Archie Rose notes that the spirit could work in a Mitey Mary or in an Espresso Mite-ini, and recipes for both are available on the site. The differences between these two drinks probably raises some concern for non-Vegemite eaters, though. How could something that goes with a spicy, salty Bloody Mary, also go with a sweet, coffee-flavored espresso martini? Well, because Vegemite lovers will put the stuff in anything. As the HuffPost article explains, "Think about it: what makes avo toast delicious? A bit of salt. What brings out the flavour in chocolate? A pinch of salt. What makes you feel better when you're struck down with a stomach bug? Something salty."

If that's still doesn't add up for you (and, admittedly the salt and stomach bug thing was new for me), the people at Archie Rose understand. As master distiller Dave Withers said in a statement (via Mashable), "It sits in this weird but interesting place. Trying to describe how it tastes is like trying to describe the colour blue. If you like that savoury flavour of yeast-extract spreads, you’ll really enjoy it." Hope that helps!