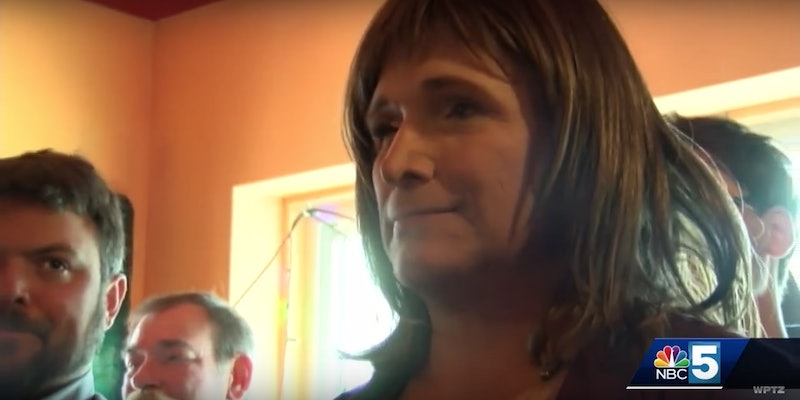 After a stunning, history-making victory in her Democratic primary, Vermont's Christine Hallquist could become the first transgender governor in U.S. history. Hallquist dominated her primary, received 47 percent of the vote, compared to the next most successful candidate who received 22 percent, according to the New York Times. Now, as an openly transgender woman and first-time candidate for office, Hallquist is on to the midterms.

According to CNN, Hallquist transitioned publicly in 2015 while working as an energy company executive, becoming the first CEO to transition while currently holding the position. During her candidacy announcement, Hallquist said, "My path to being my authentic self was certainly not easy. However, it's always been important to me to live openly and honestly. I chose to transition in a very public way because I felt I owed it to those at Vermont Electric Cooperative who put their trust in me."

Since then, Hallquist has campaigned upon a platform focused on increasing opportunities for renewable energy and boosting the state's economy through increased broadband access.

"If you look at my platform, it's about economic development," Hallquist said in an interview with Politico. "It's about moving to improve healthcare to a medicare for all system, it's accelerating working on climate change and ensuring every child receives a quality public education."

But even if Hallquist doesn't defeat Scott, she has already established a groundbreaking victory in becoming the first transgender woman to be endorsed by a major political party. This comes at a time when records are being broken across the board for LGBTQ representation in politics: in 2018, over 400 gay, lesbian, transgender or bisexual candidates have been or are currently running for office, according to The New York Times.

But Hallquist doesn't want you to think of her as a transgender candidate. At least, not entirely. In an interview with NBC5, she said, "I consider myself to be a very strong leader with a good history who happens to be transgender ... I would ask the voters who are struggling with the fact that I am transgendered, 'Try to look beyond that. Try to look at what I've done.'"

In her Politico interview, she also shed some light on how she plans to help the LGBTQ community as the midterms approach. "Almost four years ago, Mara Keisling [the head of the National Center for Transgender Equality] told me, '[The best way to give back to the trans community] is to be successful. So I will be successful as governor," she said.