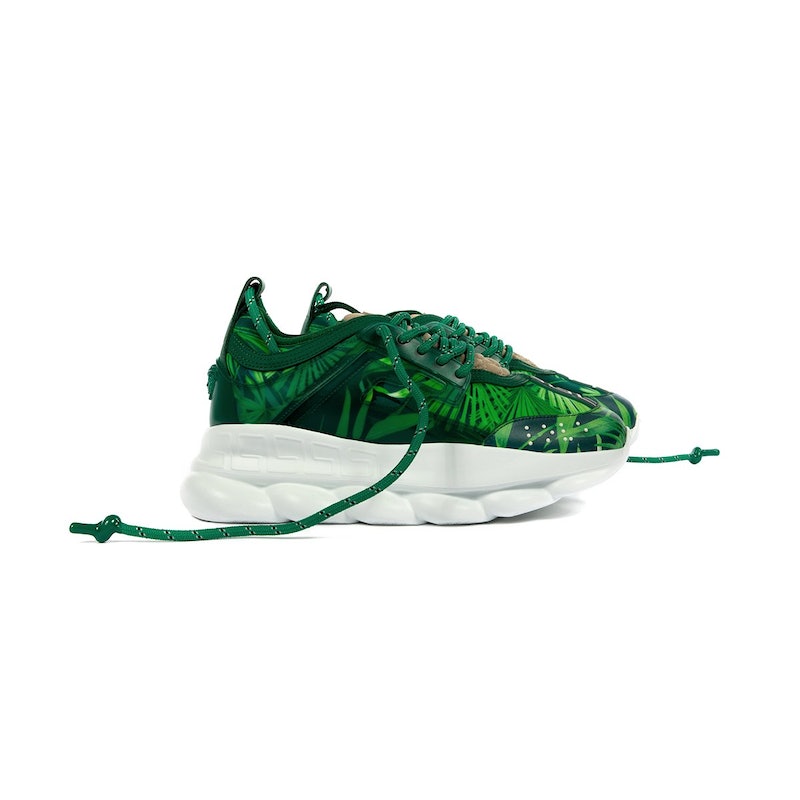 Versace is collaborating with lifestyle brand Concepts to remake Concept's "Chain Reaction" sneaker with the iconic green leaf print. The shoes are limited-edition, and are available in both women's and men's sizes (offered in sizes 35 to 40.) Lopez's sheer gown featured an emerald jungle leaf pattern and a belly button reaching plunge, and the chunky sneakers mimic just that.

The shoes come with the same pattern, and the tongue comes in a nude shade in order to mimic the deep plunge. The shoes also feature a streetwear-worthy chain-linked rubber sole, which give the shoe an overall chunky effect. There is also the word "love" written in a Braille pattern on the toe, and a translucent emerald Versace Medusa head on the heal in order to tie in the luxury label's collaboration.

The sneaker also has a luxury label price tag attached to it. The women's version costs $1,075, making it a splurge purchase.

The dress created such a buzz throughout the world that Google's executive chairman, Eric Schmidt, admitted that the gown was basically the reason Google Images search became a thing.

In an article that Schmidt wrote for Project Syndicate in 2015, the exec said, "When Google was launched, people were amazed that they were able to find out about almost anything by typing just a few words into a computer. Our cofounders, Larry Page and Sergey Brin, kept iterating. They started with images. After all, people wanted more than just text. This first became apparent after the 2000 Grammy Awards, where Jennifer Lopez wore a green dress that, well, caught the world's attention."

Schmidt continued, "At the time, it was the most popular search query we had ever seen. But we had no surefire way of getting users exactly what they wanted: J.Lo wearing that dress. Google Image Search was born."

But that iconic fashion moment almost didn't happen. In the debut episode of Lopez's new YouTube series, “Moments of Fashion," in April 2019, the artist shared that she almost didn't pick the Versace dress.

Lopez was busy filming The Wedding Planner, so her busy schedule only allowed for her to pick out a Grammy dress just hours before the red carpet.

"Usually if you come to a fitting of mine, there are tons of dresses and tons of shoes. There's always so many choices. But this day we only really had a choice between two dresses," Lopez shared in the video. “One was kind of like a white dress and the other was the Versace jungle-print dress.”

Her stylist at the time, Andrea Lieberman, urged Lopez to pick the white dress since the Versace gown was already publicly worn by three people — including Donatella Versace herself. Luckily Lopez decided to go with her instincts and donned the jungle print number, making history.

Now you can have a piece of that history by getting your hands on the Versace x Concepts Chain Link sneakers. It will just cost you.

More like this
'Love Island' Tanyel's Latex Versace Dress Was Gifted By A Former Islander
By El Hunt
Olivia Rodrigo’s Grammys After-Party Dress Was Sequined Perfection
By Alyssa Lapid
Harry Styles Has Become An Accidental Vinted Model
By El Hunt
Aerie’s Curve-Hugging Offline Leggings Will Give You A BBL In Seconds
By Bella Gerard
Get Even More From Bustle — Sign Up For The Newsletter
From hair trends to relationship advice, our daily newsletter has everything you need to sound like a person who’s on TikTok, even if you aren’t.