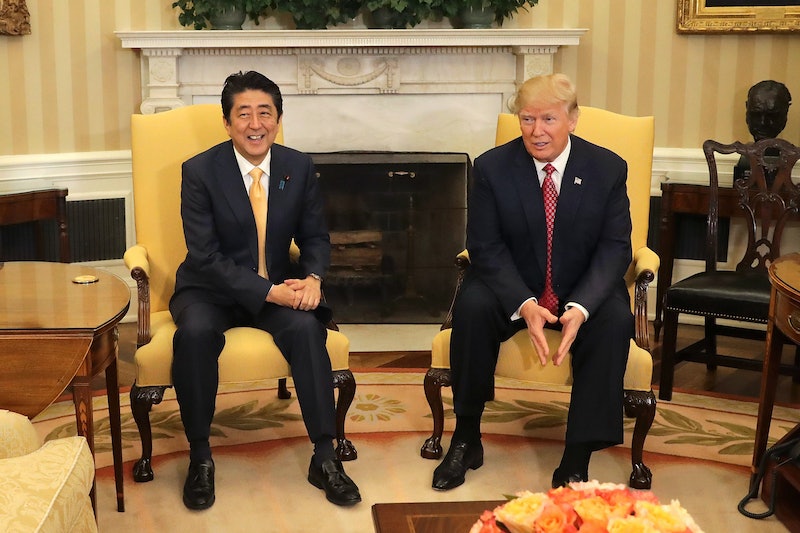 Hey, did you know the White House is very famous? Apparently Donald Trump thought Japanese prime minister Shinzō Abe didn't, even through he's actually been there twice before. Trump greeted Abe Friday morning for the Japanese PM's official visit and, predictably, made a gaffe that took over social media in a matter of minutes. Now the "very famous White House" memes and jokes are completely swallowing Trump's news cycle, and it's amazing.

Abe and Trump spent the morning together before arriving at the White House, at which time Trump delivered his now already infamous line. "Prime Minister Abe, on behalf of the American people, I welcome you to the very famous White House," Trump said, to the groans of millions of Americans who still can't believe this guy is the president. Once again, Trump's pathological urge to assert his dominance has made him a laughing stock. Trump's daily face-palm moment is especially embarrassing this time because it's a complete affront to Japanese culture, which values modesty and humility. At least it happened on Trump's turf, because it might have been a serious political nightmare if Trump had said something along those lines while visiting Japan.

The jokes in response to Trump's screw-up are hilarious, but just remember, don't get too distracted by little things like this that he does. It's a nice little humorous break from political reality, but it doesn't matter in the long run. Trump is a lot more dangerous than he sometimes gets credit for, and people still need to treat him like the threat that he is. Read through these awesome "very famous White House" jokes, then get right back to kicking Trump out of there.

It's Not A Roadside Diner, Dude

Does He Even Read The Briefing Materials?

Even CNN Joined In On The Dog Pile

Get A Friend To Be Your Third And Fourth Hand

The Word "Very" To Trump: Why You So Obsessed With Me?

Even This Pupper Knows How Lame It Was

It All Stems From His Fear Of Mediocrity

He's Really Just Trying To Up The Real Estate Value

It's hard to say that the "very famous White House" is a good thing since it's so cringe-worthy, but hopefully it made people smile a little bit, something everyone needs more of these days. But now it's back to resisting Trump and smashing the patriarchy.