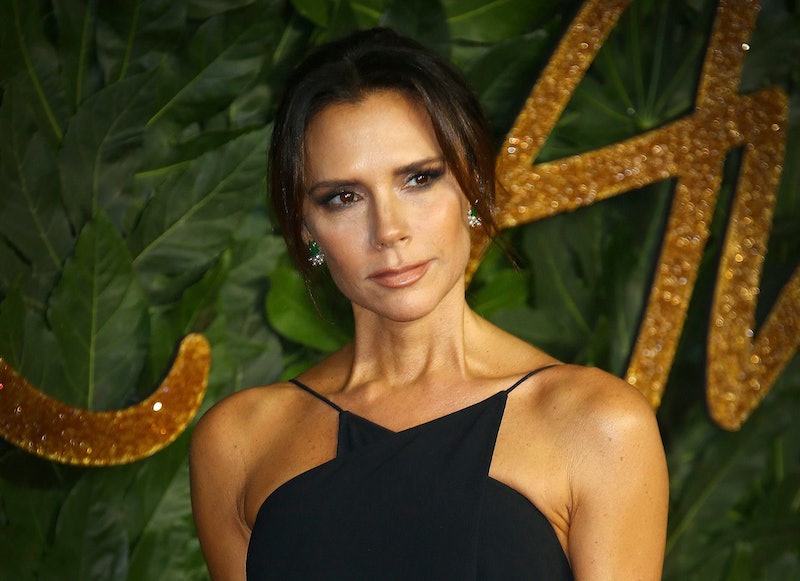 Since leaving the Spice Girls, Victoria Beckham has taken over the fashion industry. Her eponymous brand regularly receives rave reviews and has rightfully earned the 44-year-old a place at the top. But it seems she's got her sights set on yet another realm. Yes, Victoria Beckham is finally launching a beauty brand and it sounds ideal for any person looking for a luxurious yet stress-free routine.

I say finally, because fans of VB have been waiting patiently for her very own beauty range. In 2016, she debuted a collaboration with Estée Lauder. A second followed a year later, selling eyeshadows, lipsticks, mascaras, powders, and more inspired by the designer's favourite cities.

Now, Beckham has announced that Victoria Beckham Beauty is officially under way. An exact launch date hasn't been set just yet, but an autumn/winter 2019 release has been confirmed. "I want to take care of women inside and out, providing them with the must-have items in make-up, skincare, fragrance, and wellness that I feel I need in my own life," she told Vogue.

The undisclosed beauty products will be sold on Beckham's website. Although there has been no talk of prices, expect the luxury range to be on the more expensive side. (I suppose you do get what you pay for.)

The best part about the news is that Beckham has expressed a desire to know what beauty products people are looking for. "Just like I spend so much time in the fitting room getting to know what my customers want to wear, I’m going to be asking women to tell me which products they want me to develop for them in the beauty and wellness arenas," she added to Vogue. "It’s important for me to know what they want."

It's unclear how Beckham will be speaking to individual women, but I'm sure she won't mind you sliding into her DMs with some thoughts. For example, my dream list would include a foundation or concealer that doesn't turn orange or dry skin out towards the end of the day, a skincare regime that won't take a million years to work your way through, and a product that can be used on lips, eyes, and cheeks without causing an allergic reaction.

Beckham herself has always been open about her beauty regime, giving the world an idea of what could be to come. As Glamour reports, she has been known to use a £1,2000 face cream made using her own cells and blood. But she is also a fan of much cheaper options including £7 Bioderma make-up wipes and Weleda's Skin Food which costs just £11. She also told Elle that she makes her own face masks using a combination of organic oatmeal, egg whites, and manuka honey.

If you were a fan of Beckham's partnership with Estée Lauder, you'll be pleased to know that she's hired the brand's head of global make-up development and marketing, Sarah Creal, as the co-founder and CEO of Victoria Beckham Beauty. In a 2017 interview with Vogue, Creal mentioned how Beckham tested absolutely everything in the Estée Lauder collab to make sure it worked the way it was supposed to.

Beckham's high standards are guaranteed to play a part in the success of her own beauty range. Another factor will be her love for "simple and easy" looks that consist of "four to five products max", as she once told Estée Lauder, adding that she wants people to rely on her for all their beauty needs.

I only have one thing left to say: Sign me up.