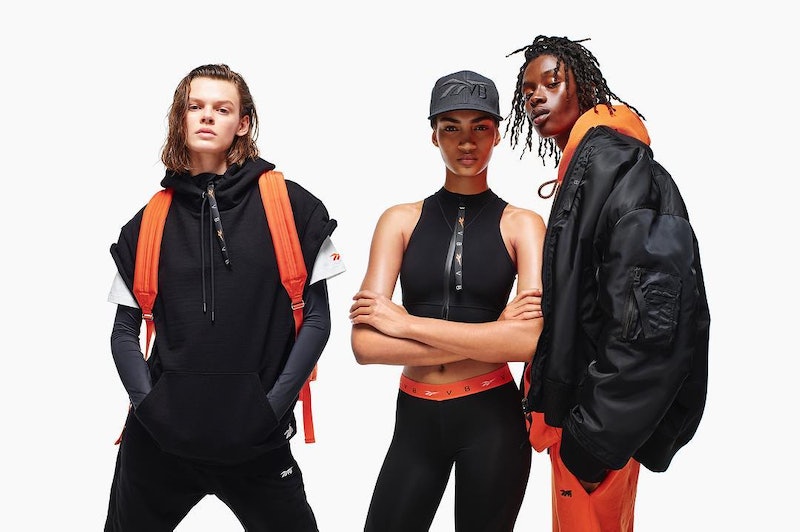 Gym wear may be the least prioritised part of your wardrobe, but that's all set to change thanks to Victoria Beckham's new collaboration with Reebok. The Spice Girl-cum-designer has soaked up all of her past experiences and powered them into a truly luxe activewear collection. So where can you buy Reebok x Victoria Beckham and, more importantly, how much is it going to cost?

Well, the entire range is available on Reebok's site. Comprising everything from sports bras and beanies to basketball-inspired trousers and cosy hoodies, the collection isn't the cheapest investment you'll ever make. Prices start from £24.95 for a pair of running socks and range up to an eye-watering £349.95 for an oversized bomber jacket. The vast majority of the designs aren't priced completely out of reach with premium T-shirts and leggings all costing under £100.

Beckham's sportswear collaboration was first announced in April 2018. Last summer, she gave fans a glimpse of what was to come with a capsule range featuring famed basketball star Shaquille O'Neal. That '90s spirit has continued into this collection which brings functionality and fashion together. (In layman's terms, that means you can wear any of the pieces outside of the gym without worrying about stares from passersby.)

The 44-year-old appears to have fused the spirit of the two places she has arguably spent the most time in. The relaxed feel of L.A. and the sharpness of London can both be seen in various unisex pieces. The colour palette is unmissable too with Beckham's signature shade of camel sitting alongside sunset orange and monochromatic hues.

Beckham has also entered the trainer market. Known as the Bolton Sock, her modern design features a sock upper that transforms the trainer into a boot-like style. The striking footwear comes in two colourways (bright orange or black-and-camel) and will set you back £229.95. That may sound pricey, but it is VB after all.

Turns out the trainer is something Beckham has been longing to release. "I’ve wanted to put a trainer in my collection for a long, long time, but it's something that's very specialised," she told Vogue. "I had to do it with a brand that had the technical experience and the know-how.” The designer revealed on Instagram that a sock-less version of the shoe will be available in March.

She also told the magazine that she has been a fan of Reebok ever since the Spice Girls days and that she expects "a lot out of [her] workout clothing, but [she] also expects it to be able to carry [her] from the gym through the day."

It's not surprising to hear that VB doesn't always have time to change outfits. In a recent interview with the Guardian, it was reported that the designer gets up between 5:30 and 6 a.m. every morning to work out before embarking on the school run and usual working day. Her exercise regime alone sounds exhausting. It involves 45 minutes of "uphill fast walking, jogging, and running" on the treadmill, then 30 minutes of leg workouts, 30 minutes of arm exercises, and "toning and conditioning, then loads of planks and that kind of thing for my core."

Just reading all of that has put me in the mood for some retail therapy. Who's with me?