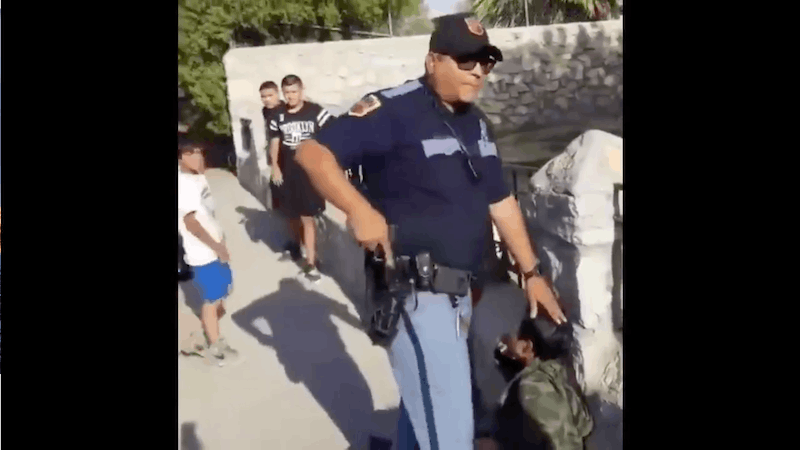 A police officer in El Paso, Texas is reportedly under investigation after a viral video showed the cop pulling a gun on children during a confrontation on the side of the street. According to ABC News, the officer has been placed on desk duty while his department determines whether or not he followed proper protocol during the incident.

"This is a serious matter that will be thoroughly investigated," El Paso Police Department Sgt. Enrique Carrillo said, according to ABC affiliate KVIA. "All the facts, circumstances and events that led to the incident will be looked into."

The video shows an officer standing on the sidewalk flanked by a group of children, some of whom are screaming profanities at him. The officer appears to attempt to arrest a young man who is sitting on the ground. When the young people surrounding him continue to yell, the officer stops what he is doing to tell them to get back — then takes his gun out and points it at them. He quickly places his gun back in the holster as the children on the sidewalk continue to taunt him.

A few seconds later in the video, the officer appears to use his knee to hold the sitting boy in place. Someone off-camera can be heard screaming, "Hey, you can't do that to him!"

Another officer then jumps into view of the camera, and the pair drag the seated young man into the street, face down, and proceeds to arrest him. Just a few seconds later, the same officer who appeared to pull his gun out of his holster jumps up and whips out his baton, waving it at the small crowd.

Someone off-camera can then be heard saying, "We're going to put a report on these two fools. It's all good." An officer quickly approaches the person filming and proceeds to arrest him, too.

The video, which was initially shared on Facebook, doesn't show whatever events led up to the confrontation. As of Monday afternoon, the stream had garnered more than 4.9 million views.

"And I see the officer choking my son and I'm like what are you doing?" said Elizabeth Florida, a mother of one of the young people involved, according to news station WJXT. "So I got up in his face and said, what are you doing? You're not supposed to be doing that."

Police have told reporters that the altercation took place after officers responded to a report of trespassing. It's unclear how the situation escalated from there.

"The initial call went out as a criminal trespassing in progress," Carrillo, the police spokesman, said at a press conference. "The officers arrived and were handling that when they encountered the suspect involved in the criminal trespass and from there the events you witnessed in this video unfolded and that is where we are at."

The name of the police officer in the video has not been released, although the city of El Paso said in a press release that he has worked for the department for four years.

"A series of events unfolded while the officers were handling the call and culminated with the situation that was captured on video and posted on social media sites," the city said in a statement. "The Department’s Internal Affairs Unit is conducting an investigation of the incident. Additional resources have been allocated to assist in expediting the investigation."

It's unclear at this point whether the investigation will result in any reprimand or punishment for the officer who appeared to pull his gun out in front of the crowd of young people.