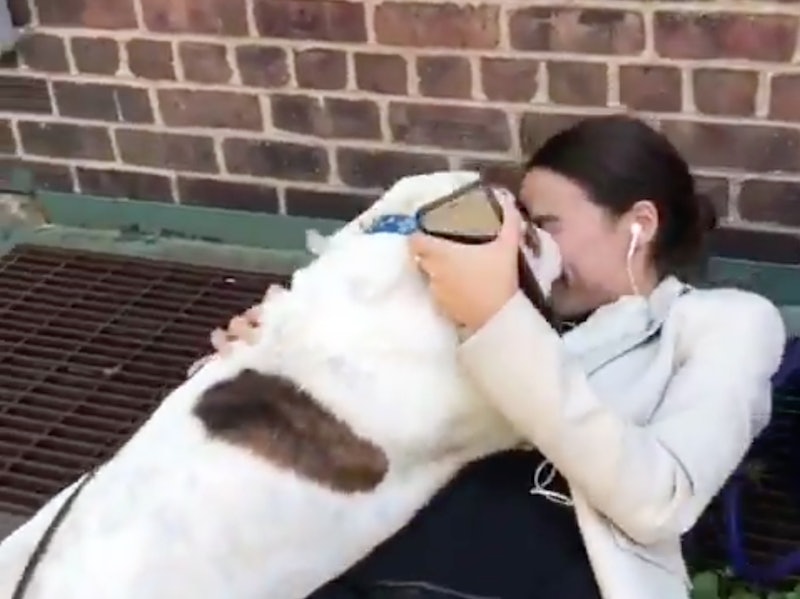 It's not every day that your conference call is interrupted by an eager, slobbering bulldog. But then again, there's been nothing ordinary about the past year for New York's 14th congressional district representative. A video of a bulldog bowling over Alexandria Ocasio-Cortez has been circulating online this week, and it's way too adorable to miss.

The clip shows a constituent's bulldog jumping on Ocasio-Cortez while she's outside and talking on the phone for a conference call. The situation escalates until she's lying horizontal with the dog on top of her, licking her face. Simone Norman — a comedian who worked on Ocasio-Cortez's campaign for Congress last year — shared the video on Twitter on Thursday and said she filmed it over the summer.

"Sorry for laughing instead of helping, alex [sic]," Norman wrote. The comedian also joked about a recent attack on Ocasio-Cortez from right-wing media: Pundits bashed the representative after finding out that her boyfriend has a government email address, assuming that meant she'd hired him to her staff.

"Leftist darling @AOC spotted necking with heavyset mystery man in broad daylight," Norman quipped on Thursday of the bulldog video, "someone better check to see if this bulldog has its own congressional email account."

The video gained traction later in the afternoon on Thursday when researcher Bobby Lewis tweeted it, adding, "the most important video of the week is @AOC being attacked by a constituent's dog." Ocasio-Cortez later shared the clip herself with the caption: "Snuggle ambush in the Bronx while I was on a conference call."

According to Norman, Charlie is the dog of a constituent who lives in Parkchester, a neighborhood in the Bronx. Ocasio-Cortez represents the eastern side of the Bronx as well as a region in the north and middle of Queens.

Norman's video is just the latest internet sensation moment for Ocasio-Cortez. Her tweets regularly go viral, but it's the videos of her that are often the most iconic. Her May 2018 campaign advertisement received 300,000 views in its first day, according to CBS News — and that was when she was a barely-known politician. At the beginning of this year, a video of her dancing in a Breakfast Club satire from her college days was shared by a critic in an attempt to discredit her. One social media user turned that video into a meme, dubbing it over with a series of pop hits. A recent clip of Ocasio-Cortez breaking down the United States' campaign finance problems became the most-watched political video on Twitter.

With over 6 million followers on Twitter and Instagram combined, Ocasio-Cortez is by far the most popular new Democrat in the House, according to a Politico analysis. By comparison, runner-up Ilhan Omar (R-Minn.) has 1.34 million social media followers. A recent report from The Guardian showed that Ocasio-Cortez's engagement level on Twitter is higher than that of President Donald Trump, Hillary Clinton, or Bernie Sanders.

Whether she's dominating social media or calmly letting a bulldog attack her, Ocasio-Cortez makes it clear that she's truly in a league of her own.