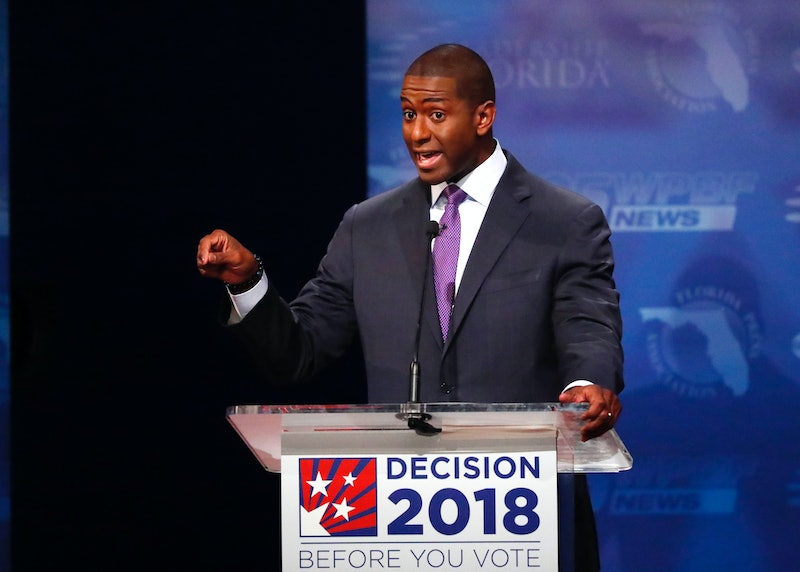 The moment began after DeSantis was asked to explain several of his past decisions, including accepting a controversial campaign donation and giving speeches at events run by David Horowitz, a far-right extremist who espouses anti-Muslim and other views that have been called bigoted. Horowitz once suggested, for example, that black Americans owe white Americans a "debt" for ending slavery.

"How the hell am I supposed to know every single statement somebody makes?" DeSantis said to defend himself during Wednesday's debate. "I am not going to bow down to the altar of political correctness. I'm not going to let the media smear me."

"He's got neo-Nazis helping him out in this state," Gillum argued. "He has spoken at racist conferences. He's accepted a contribution — and would not return it — from someone who referred to the former president of the United States as a 'Muslim n*****.'"

One of DeSantis' significant donors, Steven M. Alembik, recently insulted President Barack Obama using a racial epithet on Twitter. Alembik deleted the tweet when news of the post broke out. DeSantis put out a statement condemning the "disgusting rhetoric," but declined to give back any of Alembik's donations, which total over $20,000.

These are only a few examples from a contest that's been extremely racially charged. Just after the primary, DeSantis said that if voters chose Gillum over him, they would have "monkey[ed] it up." Many critics called the phrase a dog whistle to racists.

Gillum has also been targeted by robo calls that make use of racial stereotypes to try to discredit him. "Well, hello there," the most recent call goes, while jungle sounds play in the background. "I is the negro Andrew Gillum and I'll be askin' you to make me governor of this here state of Florida." The voice in the robo call uses a minstrel-like dialect and plays chimpanzee noises after Gillum's name is announced.

DeSantis' campaign denounced the calls and assured the public that his campaign is not issuing them. The Washington Post reported that they were made by a white supremacist group in Idaho.

Wednesday's debate was intense, perhaps even more so than the first — earlier this month — which also included many attacks, including DeSantis calling Gillum "a failed mayor."

"I've watched debates for almost 40 years in Florida," a Republican donor said after Wednesday's event, according to The Miami Herald. "This is not a debate. It's an old fashioned WWF cage match."

Gillum is currently the mayor of Tallahassee, and DeSantis is a former U.S. representative. An Oct. 23 poll taken by Gravis Marketing found that Gillum is leading his opponent by about five points, with him at 51 percent and DeSantis at 46 percent. According to FiveThirtyEight, Gillum has been steadily ahead in the polls since March.

More like this
On TikTok, Tinned Fish Date Night Is The Latest Viral Food Obsession
By Emma Carey
Chris Kaba's Family Continue Fight For Justice After Viewing Police Bodycam Footage
By Sophie McEvoy
Women Around The World Are Cutting Their Hair In Solidarity With Mahsa Amini
By Darshita Goyal
Here’s Everything You Need To Know About Operation London Bridge
By Bustle UK
Get Even More From Bustle — Sign Up For The Newsletter