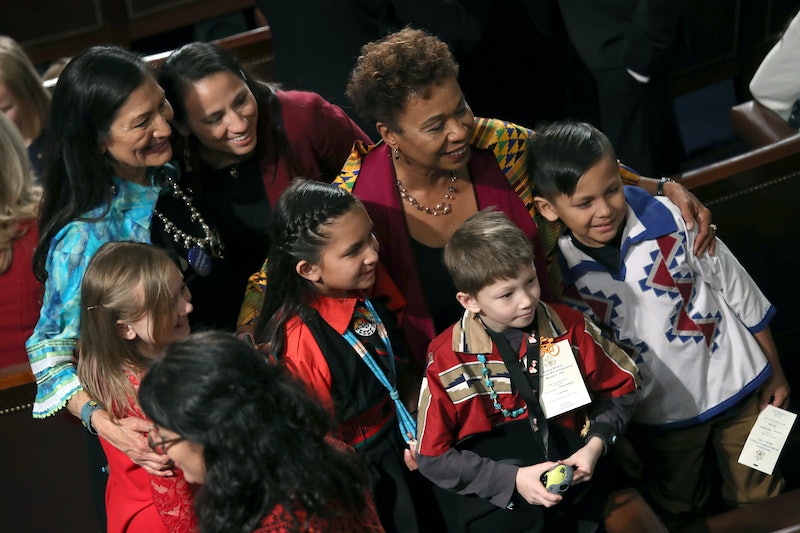 For the very first time in America's history, two indigenous women are serving in Congress. It's a historic moment for Native Americans (who are often underrepresented in national politics), and an important one that the women appeared to acknowledge on Thursday after they were sworn in to Congress. In a heartwarming moment caught on video, Deb Haaland and Sharice Davids shared an embrace after the ceremony, both of them seemingly moved by the significance of their journey.

The short video shows Haaland, who represents New Mexico, and Davids, who is from Kansas, hugging each other as House Speaker Nancy Pelosi congratulated the new members of Congress. In the clip, Haaland can be seen wiping her tears with her hands at first and then with Davids' scarf.

Honoring her heritage as a member of the Pueblo of Laguna tribe, Haaland also wore a traditional Pueblo dress, white moccasins, and turquoise jewelry for the swearing-in ceremony.

The 116th Congress is notably diverse. In fact, Haaland and Davids weren't the only ones who made history on Thursday. They were joined by the first two American Muslim congresswomen, Michigan's Rashida Tlaib and Minnesota's Ilhan Omar, as well as the first two Latinas to represent Texas, Veronica Escobar and Sylvia Garcia.

In her interviews with the media, Haaland has been clear about how more Native American women need to be heard at the national level.

"I'll continue to support political leadership training organizations like Emerge — where in New Mexico, Emerge NM recruits Native American women to the apply to the program and to run," Haaland told CNN on Wednesday. "I believe that Native women are seeing positive role models in the wins that happened this year. I will keep supporting them."

Davids has also spoken about how lawmakers need to be diverse. "Not just in demographics but in experience," Davids told The Kansas City Star in August 2018. "How many of our congressional members have struggled to afford health care? Or had to work their way through college? How many were raised by a single mom or started off at community college?"

"When you’re making policy that affects everyone," Davids told the newspaper, "everyone should have a say in that discussion."

If you recall Haaland's victory speech after the general election in November, you might get an inkling as to why she appeared overwhelmed on Thursday.

In her speech at the time, Haaland said, "Seventy years ago, Native Americans right here in New Mexico couldn’t vote. Growing up in my mother’s pueblo household and as a 35th generation New Mexican, I never imagined a world where I would be represented by someone who looks like me."

If you want to further understand the significance of Haaland and Davids’ foray into congressional politics, you can read Native American writer Sarah Sunshine Manning’s op-ed in The Washington Post from November. Manning delved into the political power Native American women had before the colonization of America — and how women like Haaland and Davids could give the indigenous community the political representation they seek.