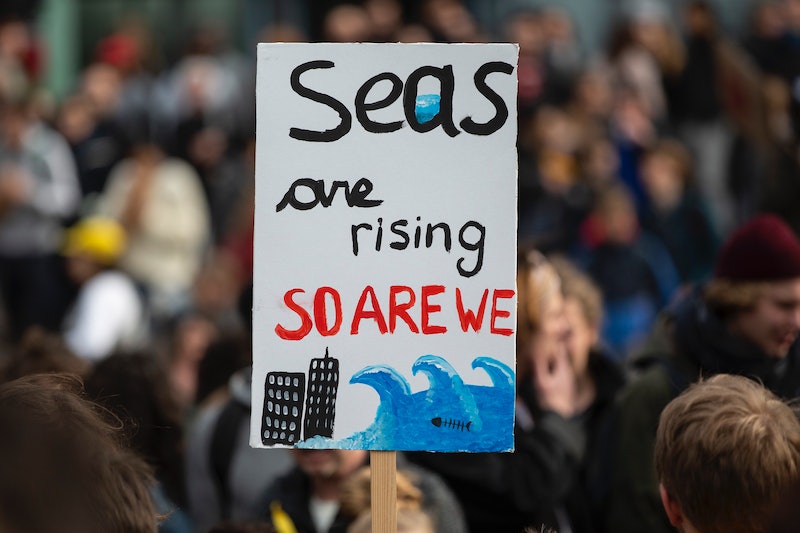 Tackling climate change hasn't exactly been a priority for the Republican-controlled Congress, and Senate Majority Leader Mitch McConnell doesn't seem to have changed his position on the issue since Democrats took back control of the House. When a group of mostly young people protested at McConnell's office about his stance on climate change on Monday, it ended in dozens of arrests — and a video of Green New Deal supporters getting arrested is a truly memorable sight.

The young activists came mostly from McConnell's home state of Kentucky, as ABC News reported. They argued that they needed their senator to start paying attention to what is likely to be the greatest problem they'll face in the future.

"I am here urging him to consider the young Kentuckians who have traveled all the way to ask him: 'Why, why are our voices not being listened to?'" said 15 year-old Lily Gardner, according to ABC News. "I am scared. We are all scared."

The group amounted to about 100 people in total, according to The Hill. They took McConnell a petition signed by over 100,000 people, urging him to join on as a co-sponsor of the Green New Deal. Instead of talking to their senator — who a spokesperson told ABC News was not in his office at the time — some of the protestors were arrested.

A video of the arrests shows a double file line walking out of a corridor in the Capitol building, with numerous handcuffed protestors singing as they walk, each led by a police officer.

All in all, more than 40 protestors left the Capitol in police custody, according to CNN. The reason for their arrests, according to CNN, was demonstrating unlawfully and obstructing space in the Capitol. The arrests reportedly came after police had warned the activists about their singing — but the protestors did not stop.

"Kentucky youth traveled here today because their state needs a Green New Deal. Mitch McConnell's Green New Deal vote is a political stunt to score some points for his wealthy donors," said Varshini Prakash, executive director of the Sunrise Movement, which organized the protests, in a statement obtained by Salon. "We're here to warn him and all senators: If you refuse to back the Green New Deal, young people will remember next time you ask for our votes."

McConnell's first response to news of the Green New Deal proposal was to say that he would put it up for a vote in the Senate quickly, which The New Yorker said was meant to force Democrats to come out either for or against it. And the proposal failing in the Republican-controlled Senate could make it look less popular than it actually is among the American people, as GQ explained — more than 80 percent of Americans support at least some version of a Green New Deal, according to recent polls.