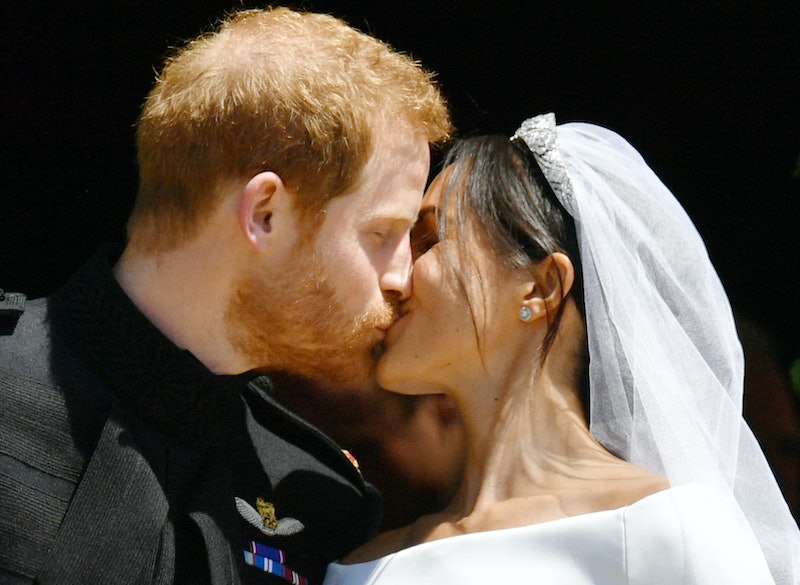 During the two most recent major royal weddings, that of Will and Kate in 2011 and Charles and Diana in 1981, both sets of newlyweds shared a kiss on the balcony of Buckingham Palace after the wedding ceremony while their adoring subjects cheered on from below. This tender moment became iconic in the tradition of royal nuptials, but Prince Harry and Meghan Markle have decided to do things their own way. Rather than lock lips on the balcony, this video shows Harry and Meghan share the first kiss after their wedding right on the West Steps of St. George's Chapel, the church where their marriage took place.

The break from tradition is actually pretty adorable. It's about an hour drive from St. George's back to the palace, and with all the traffic from the wedding, the two lovebirds probably just couldn't wait before sharing a smooch. And hey, none of Harry and Meghan's waiting public seemed to mind the kiss happening on the spot, cheering on the newlyweds as they quickly kissed on the steps.

The kiss on the steps, surrounded by the beautiful floral archways, was pretty much straight out of a fairytale. Some fans might have hoped we would get two sneaky smooches in quick succession, a la Will and Kate, but this moment was pure Harry and Meghan. It was hardly a cursory peck, but it wasn't so showy as to be considered vulgar by royal standards. Meghan mouthed something to Harry, and the pair leaned in, eyes closed and clearly beaming with love.

This kiss might seem like a random act of romance, but when it comes to the royal family, nothing is probably ever truly spontaneous. Harry and Meghan's kiss, while seemingly off the cuff, was likely orchestrated well in advance of the big day. In an article that was published on May 16, an NBC executive told The Sun, "All the broadcast teams have been working with the organizers [of the wedding] about the minute by minute breakdown of the day."

The executive also added that the balcony was never really an option for the public start of Harry and Meghan's marriage. "This wedding is not like Kate and William's," said the NBC exec, "where they will stand above the crowds on the balcony at the Palace for that natural crowd interactive moment. For Harry and Meghan coming out of the chapel is a fitting place. The public's excitement for them too could mean they will be encouraged to kiss too, so that is why we are expecting that magical moment.”

According to Town and Country, Queen Victoria kicked off the tradition of a post-wedding ceremony balcony appearance after her own wedding in 1840. Of course back then, all the newly married couple did was stand there looking regal. It wasn't until 1981 that Charles and Diana decided to introduce the scandalous new tradition of the lip-lock. This was picked up again at Prince Andrew's wedding to Sarah Ferguson in 1986, and again by Prince William and Kate Middleton in 2011.

But Harry and Meghan are hardly the first royal newlyweds to forgo the balcony altogether. The Telegraph reports that numerous royal couples have chosen St. George's Chapel — aka "The Royal Peculiar" — as the site in which to begin their matrimony. Edward VII married Princess Alexandra of Denmark there in 1863, and, more recently, Peter Philips married Canadian Autumn Kelly there in 2008. The smaller — yet still absolutely stunning — St. George's Chapel is the perfect choice for the young couple that have already set so many new precedents for royal family. And out on the steps, so close to the public that adores them, was the perfect place for Harry and Meghan start their new lives together with a kiss.