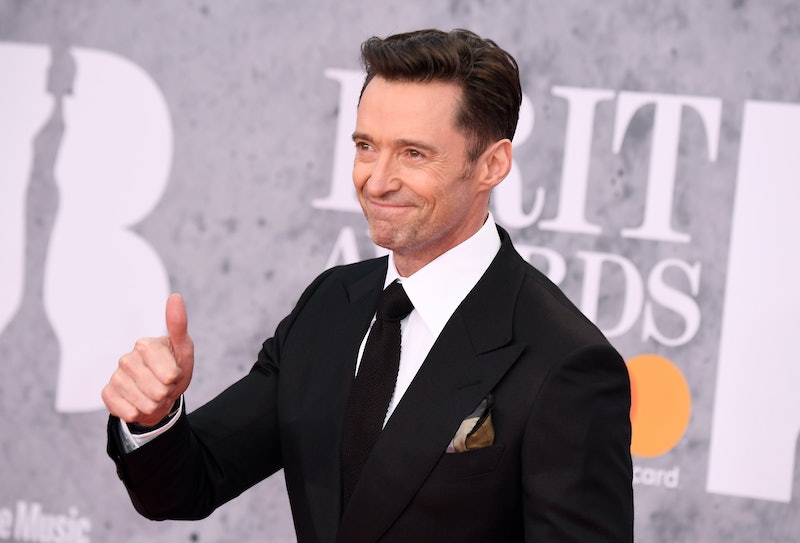 Let's face it — the world has gone all in for The Greatest Showman and Hugh Jackman's performance in it. So much so that the soundtrack is still constantly being played, and Jackman's even been enlisted for a performance alongside BRITs host Jack Whitehall as an epic tribute to the film at the 2019 awards. Backed by 150 dancers, and enough spectacle to light up the O2 Arena, and the living rooms of everyone watching at home, this really was one to remember. Relive it over and over with this video of Hugh Jackman's BRITs 2019 performance, which will make you "Come Alive" again.

If that performance didn't give you enough incentive to seek out tickets for Jackman's 2019 UK tour, then I'm not sure what will. His showcase alongside Whitehall must have been a warm up for what Bustle reports will be a tour full of the man himself performing hits from musicals and films alike. He'll reportedly be playing four dates across May and June, covering Manchester, Birmingham, and London. I expect to see you there.

While Jackman might have started the night feeling uncool, since he was the first celeb to arrive, as the Evening Standard reported, he fully redeemed all of his cool points after this performance. I mean, it's Hugh Jackman, what do you expect?

Jackman and Whitehall opened the night, setting the tone for one extraordinary BRITs ceremony. And it looks like all their hard work really did pay off. As an insider revealed to The Sun on Tues, Feb. 19, the pair had been in intensive rehearsals in the days prior to the performance, in what they anticipated would be "one of the Brits’ biggest ever opening numbers." What do you reckon? Mission accomplished?

Jackman was so good that he made a great case for replacing Whitehall, who's hosted the Brits the past two years running, as presenter for the next instalment of the ceremony in 2020. That might even have been the actor's intention. Reporting from the red carpet, Jackman told Capital FM's Marvin Humes: “Host the BRITs? Sure."

But Jackman's own kids might not be so chuffed with Whitehall's dethroning. "I’ve been chatting with him [Jack Whitehall] because my son and all his mates are finally impressed – not about Wolverine – but that I’m standing next to Jack Whitehall," the actor confessed to Humes.

Ahead of their performance, Jackman cheekily teased one spoiler from it to the former JLS member: "We’re going to do the massive stage dive together — full stage dive into the crowd. It’s kind of a challenge to see who’s the most popular, like who would be caught. And he’s up for that so we’re going.”

“Whoever wins will host the BRITs next year," Hume joked, but perhaps that'll actually be the case. Jackman won't qualify for any actual BRITs this year, despite his steely singing chops, but that still won't stop him from trying to take home the night's best win of all — getting to show up Jack Whitehall.