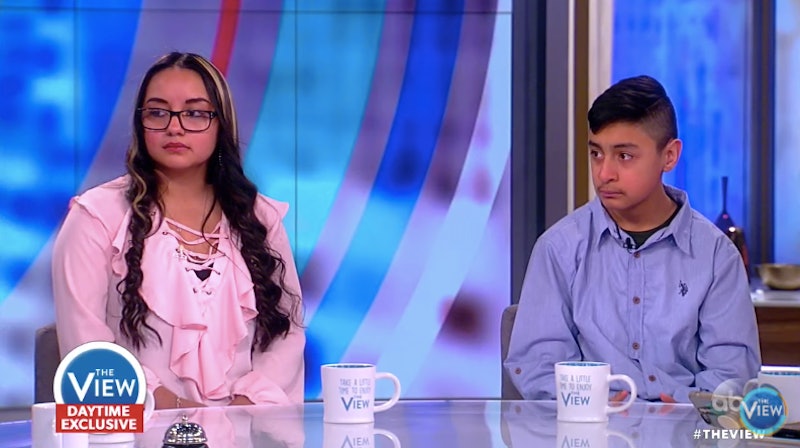 On Jan. 15, the Detroit Free Press reported that Immigration and Customs Enforcement deported an undocumented father of two, Jorge Garcia, who had been living in the United States for the past three decades. On Thursday, Garcia's children gave a heartbreaking interview about his deportation and the family's distressing ordeal on ABC's The View.

While speaking on the talk show, Garcia's 12-year-old son said that he felt "sad and angry" about his father's deportation and broke down in tears. Garcia's son was joined by his older sister and mother, Cindy Garcia, who explained the pain they collectively felt in the wake of their loved one being forcefully sent to Mexico.

During his time in the United States, Garcia had been a law-abiding and productive member of his local Michigan community as a landscaper. He had a clean criminal record and was an "upstanding" worker, Whoopi Goldberg, one of The View's hosts, said on Thursday. Garcia's wife said that in spite of trying to get a longer stay for him through the immigration system, the family's efforts went unheard.

"We tried to fix his status and the system failed us," she told Goldberg. "It's a broken immigration system and it needs to be fixed."

Garcia had been in the United States since he was 9 years old, and arrived with his parents as an undocumented child from Mexico. Now at 39, Garcia was no longer eligible to receive protection under the Deferred Action for Childhood Arrivals program. The program only accepts applications from individuals below the age of 16.

On the morning of his deportation on Martin Luther King Jr. Day, Garcia tearfully held his family in his arms at the Detroit Metropolitan Wayne County Airport. Holding back his tears, he told Detroit Free Press,

I feel kind of sad. I got to leave my family behind, knowing that they’re probably going to have a hard time adjusting. Me not being there for them for who knows how long. It’s just hard.

Cindy Garcia told The View that the family did try to get Garcia a longer stay in the country.

"You did everything you're supposed to do," Goldberg said. "You got the lawyers. It's not an inexpensive thing to do." So what happened, the host asked.

Garcia's wife said the legal trouble began in 2005. "In 2005, we gave [our lawyer] our money. She started the paperwork. And what had happened was, she never did anything. And when she did, she put wrong wording on the application." This, according to his wife, left her husband in a precarious situation ultimately leading to his deportation.

ICE spokesman, Khaalid Walls, told CNN that Garcia had managed to secure four reprieves to stay in the United States but he was first ordered to leave the country in 2006. Under former President Barack Obama's administration in 2009, Garcia was on the immigration system's legal radar once again. Ultimately in 2018, the 39-year-old was forced to leave the country.

While speaking with Goldberg, his daughter, Soleil Garcia, shared optimistic and uplifting words for undocumented youths in the country. "Try to at least talk to your father or at least one of the persons who got deported. Try to take care of yourself knowing they're gone," she said. "There are people that are going to be there to help you, to support you. You just have to let it out and not hold it in."

For now, Garcia will live with his aunt whom he hasn't seen in nearly three decades. But he does plan to start a petition to return to the United States. In the meantime, his family waits.