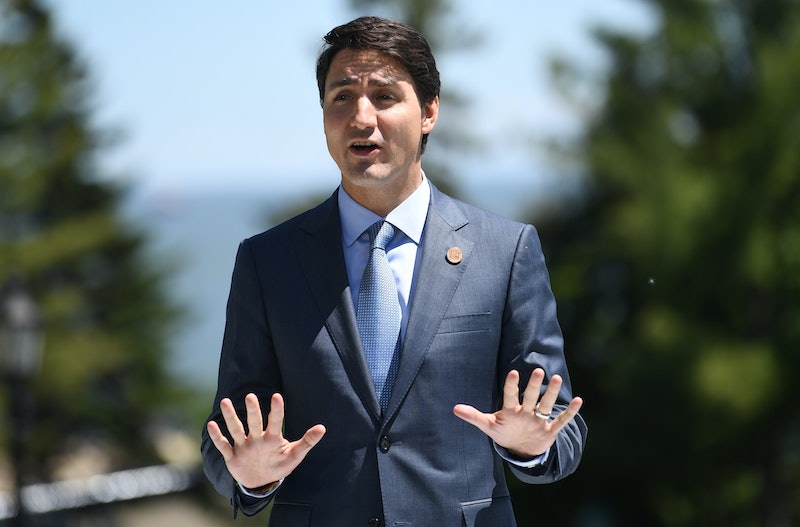 Some world leaders are hesitant to unequivocally denounce racism. Others are more forthcoming in their fight against it and consistently so. During a rally in Sabrevois, Quebec, the prime minister of Canada was recorded responding to a heckler who kept interrupting his speech, according to The Hill. The video captured Justin Trudeau telling the heckler "racism has no place," and his general message resonated with the audience, who cheered in response to the heckler's questions about illegal immigration.

The interaction was in French, and according to Vice News' translation, the woman shouted, “I want to know when you are going to refund the $146 million we paid for your illegal immigrants."

“Madame,” Trudeau answered in French. “This intolerance towards immigrants has no room in Canada.”

Amid the heckler's efforts to interrupt, Trudeau went on with his speech about the strength of Canada and how immigrants helped to build its foundation as the majority of the crowd clapped in support.

After Trudeau finished his speech, the woman from the crowd approached him, with many in the crowd telling her to "shut up," and she repeatedly asked, “Mr. Trudeau, are you tolerant towards Quebecois?" Trudeau responded that her “racism has no place here” and that he’s a “proud Quebecois,” according to Vice News.

The video also captured an interaction between the heckler and an official in plain clothing, who tried to question the woman. He holds her by the arm, and the woman pushes back, accusing him of bruising her arm and breaking her bones.

“I have the right to say my opinion to Mr. Trudeau,” the woman told the officer, before yelling that she was not threatening anyone and demanding that he let her go.

Trudeau has been clear in his role as a civil rights advocate and a leader quick to denounce racism, shown in his response to the Charlotesville rally last year. According to USA Today, Trudeau had tweeted, “We know Canada isn’t immune to racist violence & hate. We condemn it in all its forms & send support to the victims in Charlottesville.”

This time around, the heckler's point of contention came from the country's more recent problem of undocumented immigrants crossing from the United States into Canada. The Trump administration's zero-tolerance policy on illegal immigration has reportedly resulted in an influx of migrants traveling across the border up north, according to The Hill. Fearing deportation under Trump, Reuters reported that upward of 20,000 people searching for asylum crossed the border illegally into Canada last year. In June, the Royal Canadian Mounted Police caught 1,263 people crossing the border, and that number grew to 1,634 people for the month of July, according to Vice News, though the overall number has been in decline for 2018.

Because of the extra costs in handling the wave of undocumented migrants — which include temporary housing and assisting the Immigration and Refugee Board with the flood of cases — the city of Quebec is sending the bill on to its federal government, asking for $146 million, the same figure that the heckler asked Trudeau about. The figure includes an estimate for associated future costs. Part of the heckler's anger may be from what's currently budgeted; according to Vice News, the province is only set to receive $36 million at this point.

Outside of Quebec, the country does have money going toward the issue in an attempt to alleviate the overwhelmed system: Canada has allowed an overall extra $173 million to bolster border security, more temporary housing, and to help with backlogged caseloads.