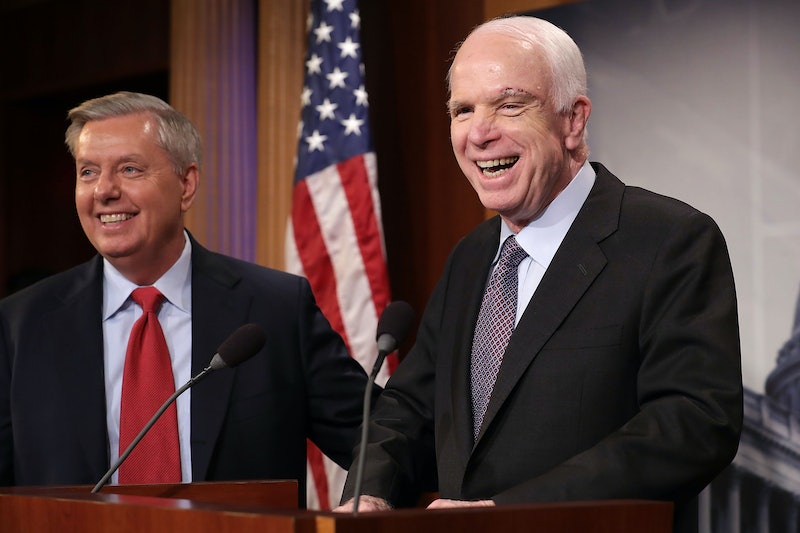 In a speech given on the Senate floor on Tuesday afternoon, Sen. Lindsey Graham paid tribute to Sen. John McCain, who died of brain cancer on Saturday. Graham's emotional, tear-filled speech about his best friend was filled with one-liners and anecdotes from start to finish. And a poignant memory that Graham shared highlighted how the late Sen. McCain taught him how to fail.

During his nearly 20 minute speech (which you can see in full below), Graham said, "I learned [from McCain] that failure and success are the different sides of the same coin...I have become better from my failures because it teaches us."

Graham continued, "To those who are striving as a young person, remember John McCain. He failed a lot but he never quit. The reason we're talking about him today and the reason I'm crying is because was successful in spite of his failures."

Graham is one of many senators who have spoken on the Senate floor in the past two days to honor McCain, who was known as the "Maverick" for his ability to reach across partisan aisles to get deals done. Many of his colleagues spoke of his unyielding moral code of conduct and his fierce dedication to serving his country.

One of McCain's most well-known "failures" was that of his presidential campaign in 2008, when he lost to then-senator Barack Obama in a historic race. Graham mentioned McCain's loss in his speech on Tuesday, saying, "John taught us how to lose."

He continued, “When you go throughout the world. People remember his concession speech as much as anything else. There are so many countries where you can’t afford to lose because they’ll kill you. And John said that night, ‘President Obama is now my president.’ So he healed the nation at a time he was hurt.”

In McCain's infamous concession speech at the time, he said,

It is natural tonight to feel some disappointment, but tomorrow we must move beyond it and work together to get our country moving again. We fought — we fought as hard as we could. And though we fell short, the failure is mine, not yours...Tonight — tonight, more than any night, I hold in my heart nothing but love for this country and for all its citizens, whether they supported me or Sen. Obama, I wish Godspeed to the man who was my former opponent and will be my president.

McCain's legacy has been honored over the past few days by those on either side of the political aisle. In an interview with Meet the Press host Chuck Todd on Sunday, Hillary Clinton, another presidential candidate who lost in 2016, said of her memories of McCain, "He understood how important it was for us to... trust each other, to get things done."