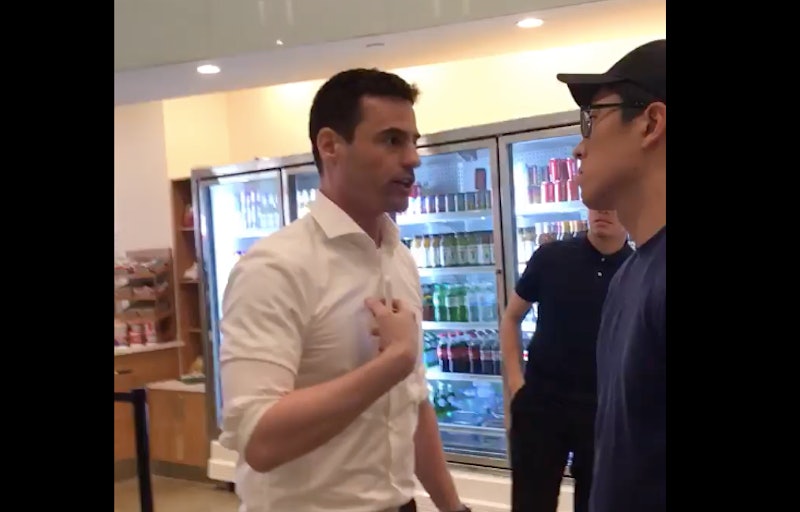 A video of a middle-aged white man threatening to call ICE on Spanish-speaking workers has gone viral this week. While eating lunch at the Midtown Manhattan restaurant Fresh Kitchen on Tuesday, the man apparently heard some of the workers speaking Spanish and called over the manager. He yelled, "My guess is they're undocumented," and threatened, "my next call is to ICE to have each one of 'em kicked out of my country."

"If they have the balls to come here and live off of my money — I pay for their welfare, I pay for their ability to be here — the least they could do is speak English," the man can be heard saying in the video. "If you intend on running a place in Midtown Manhattan, your staff should be speaking English. Not Spanish. I am calling ICE."

A customer captured the video and gave it to her husband, who posted it on Facebook. The clip quickly spread there — raking up 4.5 million views as of this writing — and then went viral more widely on Wednesday. Many viewers condemned the rant, calling the man's words bigoted and criticizing his assumption that people speaking Spanish are undocumented immigrants.

The city's mayor, Bill de Blasio, gave a thinly-veiled reference to the incident on Twitter on Wednesday, writing: "The 8.6 million people who call this city home speak more than 200 languages — they're all New Yorkers and they're all welcome here."

Bitta Mostofi, New York City's commissioner of immigrant affairs, told The New York Times that anti-immigrant episodes like this "while horrifying, are not commonplace — they also don't belong in our city." An ICE spokeswoman noted that all undocumented immigrants are at risk of deportation, but also told the Times that the agency's tip line "is solely for the purposes of making legitimate reports of suspected criminal activity" and "should not be used as an instrument to intimidate or harass."

New York City's food industry is known to depend on undocumented labor. A 2007 study from the PEW Hispanic Center estimated that 33 percent of the city's cooks, 54 percent of its dishwashers, 32 percent of its food preparation workers, and 28 percent of its waiters and waitresses are undocumented. Similar trends are apparent across the United States.

"Immigrants feed this country," Noelle Lindsay Stewart of Define American, an immigrant rights group, told Eater last year. "They cultivate our produce; they cook our food. The food industry wouldn’t be possible in the way it is without them."

"They're holding the hospitality industry together," Laura Rodriguez, a lawyer who represents undocumented restaurant workers, told Invisible Hands last year. "These are often people who work insane amounts of hours for insanely low amounts of money."

New York City is often called a "sanctuary city" because its officials do not fully cooperate with ICE, instead largely declining to arrest undocumented people unless they commit crimes. But living in a sanctuary city does not guarantee safety for these immigrants.

ICE has stepped up its efforts in New York City since President Donald Trump entered office. The agency's statistics for the 2017 fiscal year show that officers arrested between eight and 21 undocumented people without criminal records in the city each month leading up to Trump's inauguration. But between February and September of 2017, the agency arrested no fewer than 40 and as many as 113 immigrants a month — again, none of whom had committed crimes.