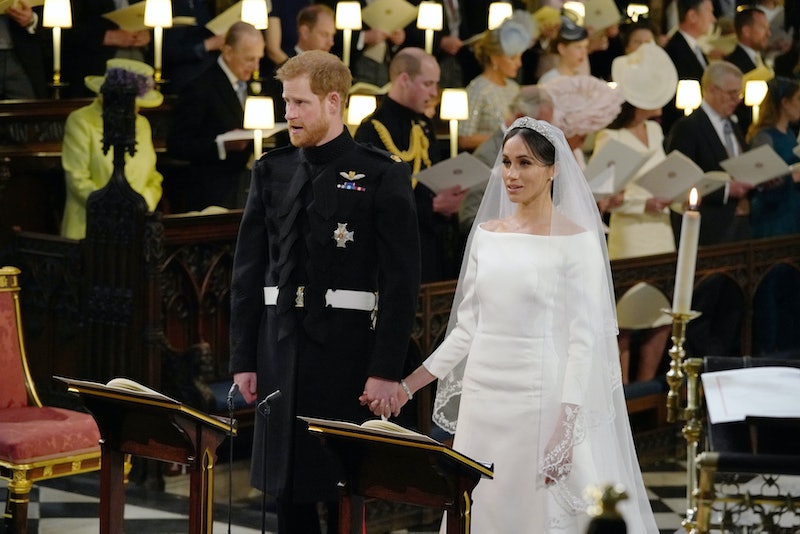 After Prince Harry and Meghan Markle shared their first kiss as husband and wife on the steps of St. George's Chapel, they immediately embarked on a carriage ride around Windsor to greet their adoring public. And video of Meghan and Harry's carriage ride shows how their chosen form of transportation is not only an important tradition in the history of the monarchy, but a symbolic tour of the beginning of the duo's lives together in public life.

The carriage ride was, of course, planned out far in advance. According to Harper's Bazaar, a royal spokesperson announced that "[The royal couple] also want the day to be shaped so as to allow members of the public to feel part of the celebrations too and are currently working through ideas for how this might be achieved." The televised carriage processional is one of the first and best ways that Harry and Meghan can share their happiness with the world.

The carriage ride began around about 10 minutes later than scheduled, around 1:10 pm on Saturday. On their first tour as a married couple, the Duke and Duchess of Sussex, according to the Telegraph, traveled "along Castle Hill, the High Street and into Windsor town centre before returning along the beautiful, tree-lined Long Walk for their reception." The carriage ride deposited the happy couple at St. George's Hall, where the first of their two wedding receptions awaited them. While spectators are welcome to line the streets at any part of the procession, the Telegraph wrote that the Long Walk is the place to see (and be seen). Over two and a half miles long, this is the final stretch of the couple's procession before they arrive at Windsor Castle. Spectators could partake in various events throughout the day, as well as catch footage from ceremony.

Everything about the royal family is steeped in tradition, all the way down to the wheels, which transport the royal personages to-and-fro. According to the official Twitter account of Kensington Palace, the Prince and Markle selected an Ascot Landau from the family's collection. Kensington Palace explained, "The carriage is one of five Ascot Landaus in the Royal Mews. The carriages are used in official and ceremonial state events, such as Coronations, Royal Weddings and State Visits." Once again, Harry and Meghan have put their own stamp on royal tradition, opting not to ride in an open-topped 1902 State Landau, the kind that both William and Kate and Charles and Diana used for their post-wedding rides. It's possible that Harry just felt more comfortable in this one, as it's the same one he road in during Will and Kate's procession in 2011.

The Ascot Landau is slightly more casual than the hefty and ornate State Landau, kind of like an Aston Martin crossed with a rickshaw. It's a more fitting choice for Harry, as he's not in direct line for the throne like his brother and father, and his wedding is, overall, a slightly more low key affair. According to Vogue, one of the other primary appeals of this carriage as opposed to the others is that it allows the couple to sit high enough to give the public good visibility of them in all their splendor.

During the procession, Harry and Meghan's carriage was pulled by six Windsor Grey Horses. The Palace also wanted to inform the public that the noble steeds at the helm of the carriage were a father-son duo by the names of Storm and Tyrone. The other four horses, according to Vogue, are called Plymouth, Londonderry, Milford Haven, and Sir Basil. It's a fitting crew to transport the newlyweds to their next adventures.

More like this
Jane Lynch Revealed Why She’s Leaving 'Funny Girl' After Lea Michele Was Cast
By Grace Wehniainen
Someone Must Pay For What Happens To Bad Bunny In 'Bullet Train'
By Arya Roshanian
Who Is Camila Cabello Dating? She's Getting Cozy With Lox Club CEO Austin Kevitch
By Radhika Menon
Taylor Swift & Her Mom Clap Back Against The “Shake It Off” Plagiarism Lawsuit
By Jake Viswanath
Get Even More From Bustle — Sign Up For The Newsletter