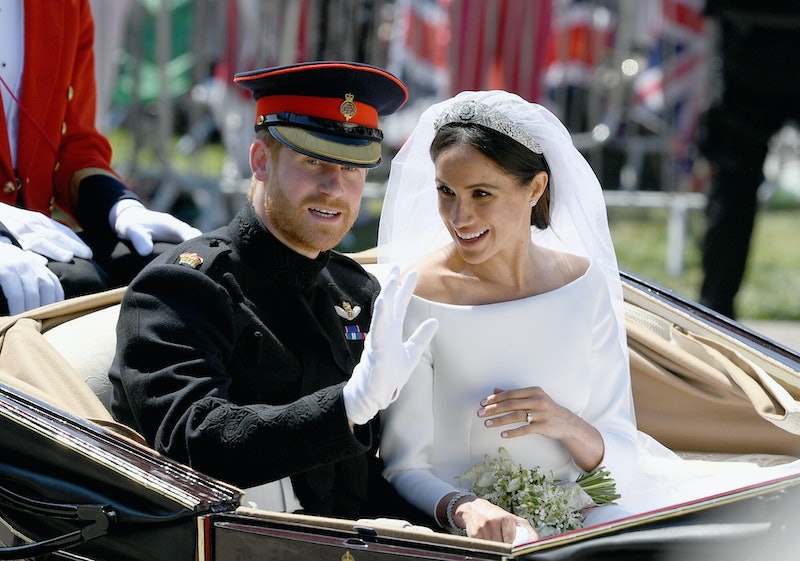 The newly titled Duchess of Sussex is living a fairytale come to life. But the pomp and circumstance of her royal wedding seemed to finally catch up with the newest member of Britain's royal family, resulting in a sweet moment of realness. While viewers at home and abroad likely had a dozen breathless moments during Saturday's royal wedding, American actress Meghan Markle had her own "oh my god" moment in the hours after her lavish nuptials to Prince Harry.

As Prince Harry and Meghan neared the end of their after wedding carriage processional around the streets of Windsor, England, their carriage turned away from the tens of thousands of spectators gathered in the streets for a glimpse of the newly wed royal couple to re-enter the gates of Windsor Castle. It was then, in one of the couple's first moments alone since saying their vows, that cameras caught Meghan bring her hand up to her chest, lower her head slightly, and say "Oh my god" to her new husband in an apparent expression of disbelief and overwhelming emotion.

"Look at her right there. Did you see that?" CBS News contributor and Entertainment Tonight host Kevin Frazier said during a broadcast that captured the special moment. "That was a real moment... Just to say 'oh my gosh.' That was the kind of moment that you wait for — to see her reacting and kind of taking in the enormity of this."

But Meghan's "oh my god" moment wasn't the only sweet interaction between Prince Harry and Meghan that cameras managed to catch on the couple's big day. When she arrived at the altar, cameras caught Meghan's soon-to-be-husband telling her, "You look amazing."

The last 48 hours have likely been a whirlwind for the 36-year-old American. After months of planning one of the year's most anticipated events, Meghan and Prince Harry opted to abide by a longstanding tradition, which sees the bride and groom stay in different locations the night before the wedding. While Prince Harry stayed with his brother Prince William at the Coworth Park Hotel, Meghan stayed with her mother at the Cliveden House Hotel, according to Kensington Palace.

For her wedding at St. George's Chapel at Windsor Castle, Meghan wore a boat-neck white gown designed by Clare Waight Keller, a diamond tiara on loan from the Queen, and a long veil embroidered with the official flora of each of the 53 country in the Commonwealth as well as the California poppy, which is the official flower of her home state. She carried a bouquet that, according to Kensington Palace, included flowers that Prince Harry had picked himself from the couple's private garden the day before.

Despite sporting a short beard, Prince Harry wore the traditional frockcoat uniform of the Blues and Royals, a cavalry regiment of the British Army. Beards are reportedly not traditionally allowed on men in military uniform, however, the Queen gave Prince Harry her permission to wear the uniform with his beard.

After their carriage ride through the streets of Windsor, Meghan and Prince Harry changed clothes at Windsor Castle before jetting off to their wedding reception in a 1968 Jaguar E-Type Concept Zero. For her reception, Meghan donned a Stella McCartney bespoke high-neck halter gown in silk crepe. Prince William, Prince Harry's older brother, hosted the couple's private wedding reception at Frogmore House.

According to the BBC, Meghan is expected to buck royal tradition by giving a speech at her own reception. It is one of a number of ways the newly-title Duchess of Sussex will have brought a touch of modern America to the British royal family.