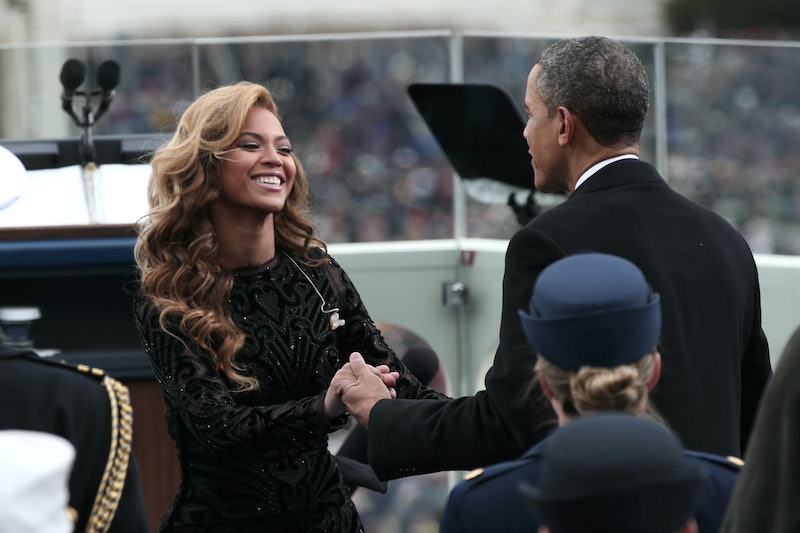 It's a pretty well-documented fact that the Carters and the Obamas are on rather friendly terms. This appeared truer and ever over the weekend, when video of Barack and Michelle Obama dancing at Beyonce and Jay-Z's concert surfaced online. Footage of the pair living it up was shared widely on social media, and fans of both couples were thrilled to see the two families in such close proximity, yet again.

The Obamas were enjoying box seats at the FedEx Field in Landover, Maryland, Yahoo Music reports. It didn't take very long for those seated in front of the Obamas to catch wind of the former first family just feet away, and members of the audience turned to capture a slew of video clips showing both Barack and Michelle dancing their hearts out during several songs on the setlist.

The concert was part of the Carter's ongoing On the Run II tour, and the Maryland show wasn't even the first tour date that Michelle attended. Earlier in July, Michelle attended a Paris date of the tour, reportedly with her two daughters, Sasha and Malia. Her presence resulted in viral video that time around, too. However, instead of dancing with her husband, Michelle was seen dancing with and near Miss Tina, Beyonce's mother. That time, the pair were seated directly next to the stage.

After videos of Obama and Michelle dancing at the concert began circulating, many on Twitter tweeted their excitement.

"Out here living their best lives," wrote one user. "I don't blame them."

One user mused that they would take the positive energy from being so close to the Obamas and use it to fuel themselves through the near future. "Barack & Michelle were at #OTRII last night and so was I, so basically I am in perfect alignment to manifest greatness + abundance for the remainder of the year," they wrote.

Another user wrote, simply, "Please come back," and apparent reference to the Obama's time in the White House.

The Obamas and the Carters have a famously friendly relationship. Beyonce sang at one of Obama's very first inaugural balls, and she returned for his second inauguration, to sing the National Anthem. But it's not just Beyonce — Jay-Z, whose given name is Shawn Carter, is also on demonstrably good terms with the former president and his wife.

Last summer, when Jay-Z was inducted into Songwriters Hall of Fame — the first hip hop artist to receive the accolade — Obama pre-recorded a speech to help present the award.

“I like to think Mr. Carter and I understand each other,” Obama said, according to The Washington Post. “Nobody who met us when we were younger men would have expected us to be where we are today."

He also made a nod to both of their exceptionally talented wives. "Let’s face it," Obama said. "We both have wives who are significantly more popular than we are."

Considering that the two families have worked or mingled together several times in recent years, it doesn't come as a total shock that the Obamas would find themselves supporting the Carters at one of their own concerts. Still, it was a pleasant surprise for onlookers, both in person, and online.

More like this
Twitter Wants To Dance With Anne Hathaway At Paris Fashion Week
By Alyssa Lapid
Beyoncé Wore A Golden Sheer Gown At Her VIP Dubai Concert
By Sam Ramsden
Beyoncé & Blue Ivy Performed A "Brown Skin Girl" Duet At Her Private Dubai Concert
By Brad Witter
Watch The Sweet Moment Adele Stopped Her Vegas Concert To Kiss Her Son
By Sophie McEvoy
Get Even More From Bustle — Sign Up For The Newsletter
From hair trends to relationship advice, our daily newsletter has everything you need to sound like a person who’s on TikTok, even if you aren’t.