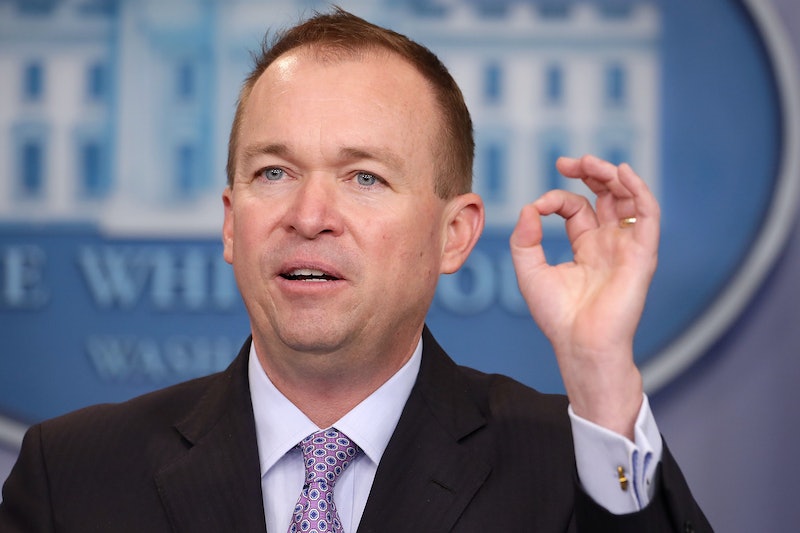 Well, that was quick. It's been one week since President Donald Trump picked a new "acting" chief of staff, but a video of Mick Mulvaney insulting Trump has reportedly led him to already start complaining about his appointee. According to Axios, Trump was "furious" to learn that Mulvaney called him a "terrible human being" during the last presidential election.

The Daily Beast resurfaced a video earlier this month in which Mulvaney made the "terrible human" remarks back in November of 2016. The clip comes from a debate between Mulvaney — he was then an incumbent candidate to represent South Carolina's 5th District — and his Democratic opponent, Fran Person.

"Yes, I am supporting Donald Trump," Mulvaney said, after saying he wouldn't get behind Hillary Clinton, "as enthusiastically as I can, given the fact that I think he's a terrible human being."

The New York Times reports that Mulvaney said "similar" things in a Facebook post that he deleted just before Trump nominated him to become director of the Office of Management and Budget (OMB). Mulvaney reportedly wrote that Trump's remarks on the Access Hollywood tape were "disgusting and indefensible," and added: "I think one thing we've learned about Donald Trump during this campaign is that he is not a very good person."

Mulvaney's spokesperson, Meghan Burris, told The Times that he "both likes and respects the president." Noting that Mulvaney had still supported Trump during the 2016 election (and "never wavered while serving within the administration"), Burris dismissed the video as "old news."

"Director Mulvaney believes in the president — because he is working every day to lift up millions of Americans and stands up for our great country," Burris added. Bustle has reached out to the White House for comment.

Now Axios reports that Trump was "furious" to find out about Mulvaney's comments. "Did you know [Mulvaney] called me 'a terrible human being'?" he apparently asked an adviser. According to Axios, Trump is complaining about Mulvaney both in the White House and to members of Congress.

Trump announced on Dec. 8 that his current chief of staff, John Kelly, would be leaving the White House by the end of the year. Kelly has held the position since July 2017; at the start of his tenure, many praised his credentials and hoped he might bring more order and discipline to the administration. But it soon became clear that Kelly and Trump did not get along well, and many commentators have been anticipating his departure for some time.

The president insisted that he had "over 10" candidates who wished to replace Kelly, despite reports that he was having trouble filling the job. Chris Christie said in a Dec. 14 statement that he was among those being considered but had taken himself off the list. Later that day, Trump announced that Mulvaney would become his acting chief of staff.

Mulvaney currently directs OMB and also directed the Consumer Financial Protection Bureau from November 2017 until earlier this month. The Times reports that he and Trump "have become golfing partners." In response to his appointment last week, an administration official told reporters, "He got picked because the president liked him. They get along."