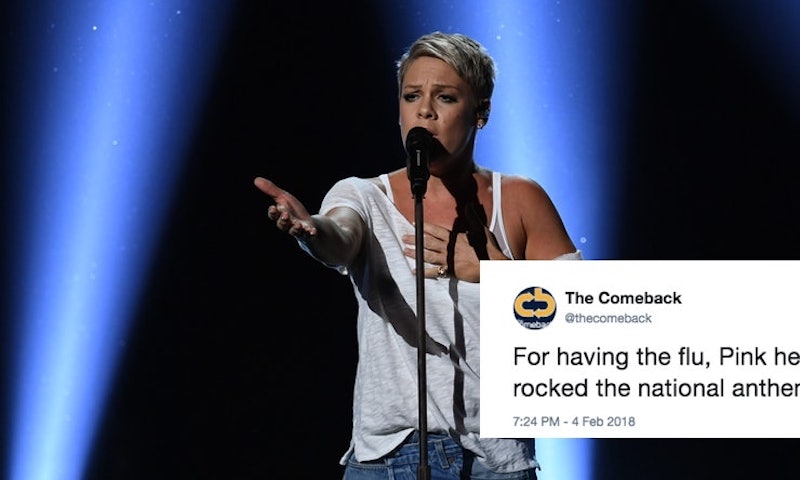 When it comes to Super Bowl entertainment, nothing beats the half time performance. From Lady Gaga to Janet Jackson to Bruce Springsteen, many of the world's best and most popular artists have sang their hearts out during the annual game's midway point over the years. This year, during Super Bowl LII, that lucky musician is Justin Timberlake. But while there's certainly a lot to get excited about from JT, he's not the only singer appearing during the show; Pink, too, had a major role in the night's entertainment. Pink's National Anthem performance showcased her gorgeous voice, as well as her eternal ability to command any crowd at any time.

It was announced in early January that Pink would be the musician to sing the National Anthem during the biggest football game of the year. The performance occurred during the Super Bowl LII pregame, and was shown live on NBC before the events began. Unsurprisingly, Pink sounded amazing during her time in front of the crowd, and her pitch-perfect performance reminded everyone why she's one of the best pop stars around — especially because, as Pink announced via Instagram a few days before the game, she had the flu. Holy crap, girl.

Performing at the Super Bowl with the flu might be huge for some people, but it's NBD for Pink. The singer is always a total badass, and she's had a pretty huge last few months, to say the least. In December, her son, Jameson Moon, turned one, and Pink and husband Carey Hart have shared adorable photos of the baby — along with six-year-old daughter Willow — on their social media accounts. In terms of her career, things have been as busy as they get for the artist. In August, she received the equivalent of a Lifetime Achievement Award at the MTV Video Music Awards, and gave a powerful, emotional speech shared widely online. Then in October, she released her album Beautiful Trauma, featuring the hit song "What About Us" — a track whose success led to Pink becoming the solo female artist with the most number-one songs in the history of the Billboard Adult Pop Songs chart.

And that's not it. In January, Pink performed at the Grammy Awards, where she was nominated for Best Pop Solo Performance for "What About Us." With the artist wearing jeans and a casual shirt and singing directly into the mic, the performance was vastly different than Pink's usual trapeze antics on-stage, but no less moving to watch.

Whatever Pink does, she manages to impress, and her Super Bowl performance was no different. You can count on the singer to always provide a show-stopping vocal display, and listening to her give her version of the "Star-Spangled Banner" likely caused chills for countless viewers. There's seriously just no one like Pink, and it's so great that she had the opportunity to deliver that performance before the 2018 Super Bowl began.Sure, the Super Bowl is technically about the sports. But with performers like Pink providing entertainment throughout the night — not to mention all those funny, creative commercials — it wouldn't be a stretch to say that football isn't necessarily the event's main focus.

And Twitter was overjoyed to see Pink take the field to sing such an iconic song, especially considering she was dealing with being sick.

Oh, Pink — the singer is seriously always going the extra mile and showing us what she's got in the most show-stopping way. She should be celebrating an incredible performance, and, hopefully, getting plenty of rest so the flu doesn't get her down. Feel better soon, Pink!