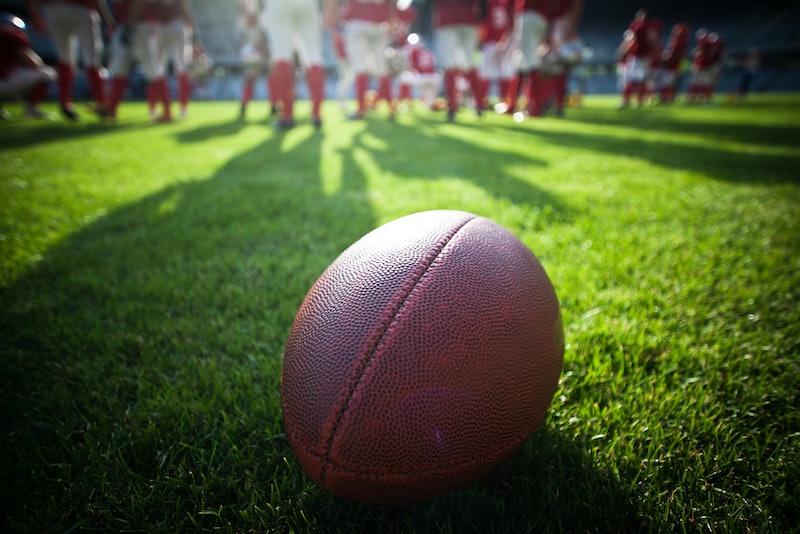 Whether you're a football fan looking forward to one of the biggest sports events of the whole year or if you're simply a fan of epic snacks and quality couch time, you're probably pretty excited about Super Bowl LII on Feb. 4. And TBH, no one will be judging you regardless of whatever reason you choose to watch the game on Sunday. On the one hand, the New England Patriots will be playing the Philadelphia Eagles, which is sure to be a good game — especially considering this will be Tom Brady's, like, one hundredth Super Bowl. On the other, if you're going to a Super Bowl party, there will surely be tons of delicious food, drinks, and... did I mention food? Whichever your reason for tuning in is, it's a good one — and also worth sharing on social media on Sunday. And, if you're looking for a caption to use along with that witty Instagram post, you're in the right place: I pulled together a few punny Super Bowl Instagram caption ideas that'll work for all types of posts on the day of the game just for you.

Whatever you care most about on Feb. 4, you're likely going to share it on social media. Let's be real — we share everything on social media these days. The big game will surely take over your feed for a few hours, so your post could easily get lost in the sea of other Super Bowl posts — which is why having a witty, genuinely funny caption to set your post apart will make all the difference. Plus, if you settle on your Instagram caption prior to the game by choosing one of these Super Bowl-related quotes, you can focus on getting your share of chips and dip during the game and watching the Patriots play the Eagles instead of missing out on what's really important while you try to think of a clever caption. A lot is gonna be happening — it's better to be prepared with more caption ideas than you need!

Check 'em out below.

“I’d run over my mother to win the Super Bowl.” – Russ Grimm

“I’m just here so I won’t get fined.” – Marshawn Lynch

"The only penalty I'm worry about during a football game is someone double dipping in the ranch sauce." - Unknown

"I can't wait to use your couch as a napkin during your Super Bowl party." - Unknown

"I'd love to attend your Super Bowl party ... just after you tell me exactly what you'll be serving." - Unknown

"Just a heads up that I'll have to leave your Super Bowl Party early because I don't like to clean up." - Unknown

"I predict one of these two teams will win the Super Bowl." - Gilbert Gottfried

"That's the biggest gap in sports, the difference between the winner and the loser of the Super Bowl." - John Madden

“I believe that a bad Super Bowl halftime show is still better than a soccer game.” - Ron White

"Everything is going tailgreat." - Unknown

"Touchdown for what!" - Unknown

"The calm before the score." - Unknown

“I always have a lot of personal goals, but primarily my main goal each year is to obviously win a Super Bowl.” - Michael Strahan

"Some people think football is a matter of life and death. I assure you, it's much more serious than that." - Bill Shankly

More like this
Rihanna Tells Us To Shush About New Music In Super Bowl Halftime Show Trailer
By Jake Viswanath
'Breaking Bad' Duo Walt & Jesse Are Back — In This Super Bowl Commercial
By Jake Viswanath
16 Trader Joe's Appetizers That Are Total Party-Pleasers
By Kaitlyn Wylde
Wait, Does Liking Someone's IG Story = Shooting Your Shot?
By Alexis Morillo
Get Even More From Bustle — Sign Up For The Newsletter
From hair trends to relationship advice, our daily newsletter has everything you need to sound like a person who’s on TikTok, even if you aren’t.