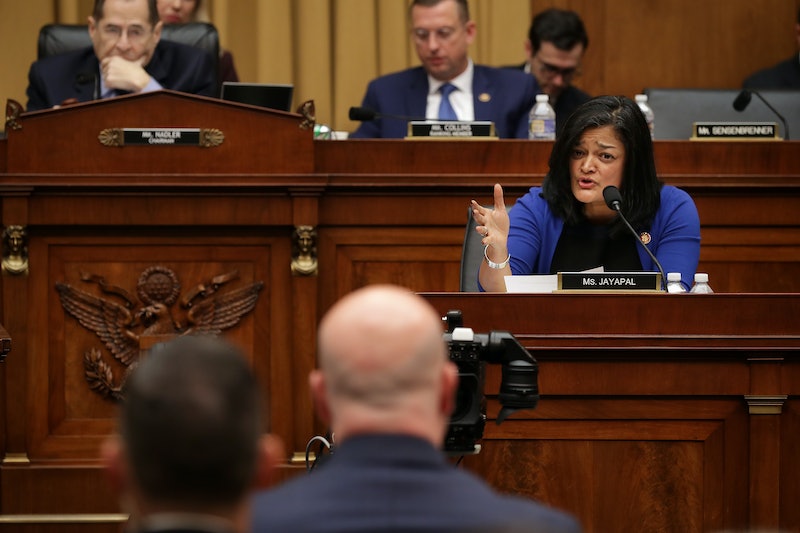 Acting Attorney General Matthew Whitaker testified before the House Judiciary Committee on Friday. Before the testimony was even finished, a video of Rep. Pramila Jayapal grilling Whitaker on the Trump administration's family separation policy went viral, due to both Jayapal's impassioned questioning and Whitaker's tone, which many criticized as "condescending" and dismissive.

The Trump administration acknowledges that it has separated thousands of immigrant children from their parents at the U.S.-Mexico border. In June, a court ordered the administration to reunite all of those children with their families, but the New York Times reported in October that the Department of Homeland Security has been "unable" to keep track of the families it separated. Whitaker confirmed this on Friday.

"I don't believe we were tracking that," he said during his testimony. CNN reports that as of November 2018, 171 children who were split up from their parents were still in the U.S. government's custody.

"These parents were in [the Department of Justice's] custody, your attorneys are prosecuting them, and your department was not tracking parents who were separated from their children," Jayapal said to Whitaker. "Do you know what kind of damage has been done to children and families across this country — children who will never get to see their parents again? Do you understand the magnitude of that?"

"I understand that the policy of zero tolerance —" Whitaker began to say.

"Has the Justice Department started tracking parents and legal guardians who were separated from their children at the border?" Jayapal asked.

"Congresswoman," Whitaker responded, "I appreciate your passion for this issue, and I know that you've been very involved with the front lines of this —"

Whitaker, pausing briefly, replied that "the responsibility for the arrest, the detention, and together with the custody of the children, was handled by DHS and HHS before those people were ever transferred to DOJ custody through the U.S. Marshalls."

Whitaker was not leading the Justice Department when it was separating families. Jeff Sessions was; Whitaker became acting Attorney General only in November, five months after Trump signed an executive order ending the policy of separating families. However, Whitaker served as Sessions' chief of staff for the entirety of the time that the administration was splitting up families.

At the beginning of his testimony, Whitaker claimed that "there was no family separation policy." Jayapal replied that this claim "has been given Four Pinnochios multiple times," a reference to the fact that the Washington Post has debunked it already, and wrote on Twitter later on Friday that Whitaker had the "audacity to lie to me under oath and say there was no such thing as a child separation policy." Bustle has reached out to the Department of Justice for comment on Whitaker's claim.

In January, government inspectors at the Department of Health and Human Services said that the administration may have actually separated thousands more children than initially reported.