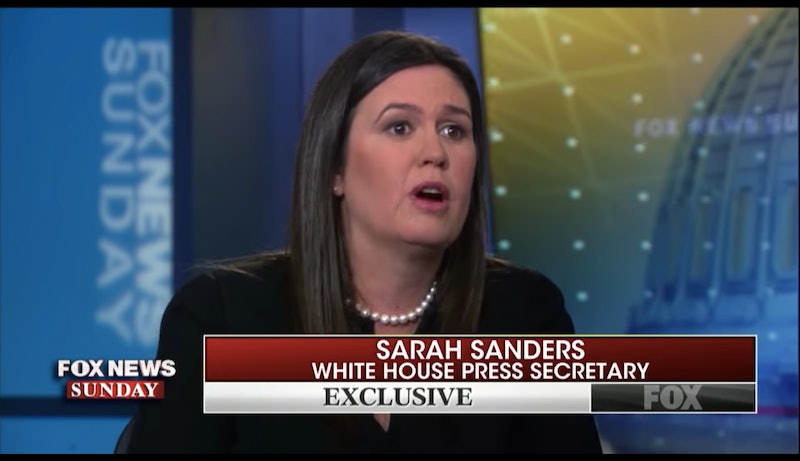 On Sunday, the White House press secretary received some push back after suggesting terrorists are entering the United Sates via Mexico during a television interview about the government shutdown. Video of Sarah Sanders' border comments getting fact-checked on Fox News illustrates the tense exchange that took place on the conservative network.

Sanders sat down with Chris Wallace for an interview on Fox News Sunday, which was dominated by discussion of the ongoing federal shutdown. During the interview, Wallace questioned why President Trump often says he wants to build a wall along the southern border to protect the United States from terrorism. Wallace indicated that the president makes these assertions in spite of his own State Department saying that "there is no credible evidence of any terrorists coming across the border from Mexico."

In response, Sanders pushed back, beginning a rather heated exchange with Wallace. The press secretary suggested that the Fox News anchor's comments were inaccurate, saying:

We know that nearly 4,000 known or suspected terrorists come into our country illegally, and we know that our most vulnerable point of entry is at our southern border.

Wallace then jumped in to further counter Sanders' claim. As the Fox News host asserted:

Wait, wait, wait, wait, wait. I know this statistic. I didn’t know if you were going to use it, but I studied up on this. Do you know where those 4,000 people … where they’re captured? Airports.

Sanders remained steadfast in her claims, saying that terrorists don't "always" come to the United States via airports. "It's by air, it's by land, it's by sea, it's all of the above," she said to Wallace. She then doubled down on her earlier comments, telling Wallace, "One thing that you're forgetting is that the most vulnerable point of entry that we have into this country is our southern border and we have to protect it."

However, Wallace didn't let the discussion end there, again adding, "But they're not coming across the southern border, Sarah. They're coming and they're being stopped at airports." Sanders then wrapped up her comments by indicating she doesn't "disagree" that terrorists are entering the United States via airports. However, she noted that she believes it's essential to bolster security on the southern border in order to protect the United States from vulnerabilities. Wallace and Sanders then moved on from their tense exchange to reflect on Trump's suggestion that he may declare a national emergency to secure border wall funding.

Sanders' impassioned insistence that terrorists are crossing into the United States from Mexico seems to very much mirror Trump's rhetoric on the matter. Indeed, during a news conference on Jan. 4, the president shared similar sentiments. As VOA noted, Trump told reporters:

We have terrorists coming through the southern border because they find that's probably the easiest place to come through. They drive right in and they make a left.

Notably, VOA also indicated that federal government officials have not confirmed that there has been an increase in any terrorist activity from Mexico, despite the president's assertions.

Given the president's insistence that a southern border wall is necessary to diminish terrorism, it is perhaps not shocking that Sanders so staunchly defended this claim on television. The press secretary's exchange with Wallace certainly captured the attention of many, perhaps including the president himself, who frequently watches the network's coverage.