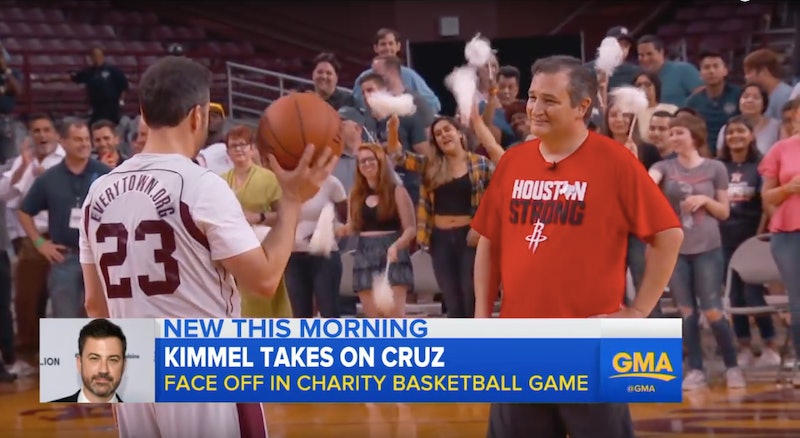 If you turn on any late night TV show at any given time, you'll likely see the host making fun of some wacky, tone-deaf comment a politician has made. And for quite some time, a particular Texas senator and former presidential candidate has been many hosts' go-to person to mock. But this past weekend was his time to turn the tables as video of Ted Cruz and Jimmy Kimmel playing basketball proved the competition was fierce. Kimmel and Cruz definitely had a good time, but there was, of course, some classic trash talk involved.

After Kimmel made fun of Cruz for his facial expressions at a Houston Rockets game, Cruz challenged Kimmel to play in a charity basketball one-on-one game in the same city (Cruz's home turf). ABC's late-night talk show host ended up walking away with his tail between his legs: Cruz beat Kimmel 11-9 on the court in a game dubbed the "Blobfish Basketball Classic" on Saturday at Texas Southern University's Health and Physical Education Arena. The sea creature reference comes from a joke Kimmel had made after Cruz's facial expressions were caught on camera. “When Ted arrived at the Toyota Center, some of the fans mistakenly thought it was Grandpa Munster Bobblehead Night,” Kimmel had said, according Huffington Post. “I mean, look at him. He looks, and, I’m not joking here, he looks like a blobfish.”

In response, Cruz tweeted to Kimmel, "All right, Big Guy...you talk a good game. You besmirched my support for the @HoustonRockets So let’s settle this man-to-man: one-on-one, hoops (or “ring-ball,” if you prefer). The loser gives $5k to the (non-political) charity of the winner’s choice." Cruz, a former high school varsity basketball player, according to ABC News, successfully took his feelings out and a golden trophy home.

The face-to-face smack talk got real, too. In a video clip tweeted by ABC’s Jimmy Kimmel Live, Kimmel is on the court with a basketball in his hand. Both are a bit out of breath, and as Cruz faces him, Kimmel asks, "Did you spend more time this week practicing basketball than trying to get those kids out of that detention center?” before passing the ball to him. The crowd "oohs" along with the drama.

According to the Houston Chronicle, the crowd cheered and whooped at all the right times, showing an enthusiasm that may not always have matched the level of skill wielding the ball. The game featured a show of missed shots, air balls, and some comical footwork in a nearly-two hour, half-court game. (To be fair though, Cruz is 47, and Kimmel is 50, and neither are exactly in movement-intensive professions.) The crowd was also reportedly heavy on Kimmel fans — many were wearing shirts declaring support for Cruz's election opponent, Democratic senatorial candidate Beto O’Rourke, the Houston Chronicle reported.

But more than just a bit of fleeting entertainment came out of this middle-aged man-on-middle-aged man game. The two players each pledged to donate $5,000 to the other's charity, according to Huffington Post. Cruz played for Generation One, a group whose stated mission is to provide life-changing early childhood education, and Kimmel for the Texas Children's Hospital, a not-for-profit pediatric hospital within the Texas Medical Center. Both charities are based in Houston. On top of the high-profile game donation by the players, more than $20,000 for both charities combined was raised through public donations as of Sunday evening, according to the verified Facebook accounts for both charities.

The "Blobfish Basketball Classic," set with its own droopy orange logo, is scheduled to air on Jimmy Kimmel Live on Monday.